Poet-activist Minnie Bruce Pratt will be the subject of a major celebration, on the eve of her retirement from the College of Arts and Sciences. 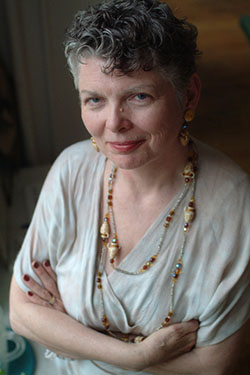 A professor in both the Writing Program and Department of Women’s and Gender Studies (WGS), Pratt will be feted on Thursday, Feb. 26, at 4 p.m. in Bird Library’s Peter Graham Scholarly Commons. The program is titled “Writing In-Between, Living In-Between” and includes brief faculty remarks, followed by readings by some of Pratt’s former creative nonfiction writing students.

The event is free and open to the public; however, attendees are encouraged to R.S.V.P. to lapayne@syr.edu. A computer-aided real-time translation of the texts being read will be projected on an overhead screen.

“Minnie Bruce Pratt is a ‘pioneer’ in every respect of the word,” says Gerald R. Greenberg, the college’s senior associate dean and associate professor of Russian and linguistics. “As a teacher-scholar, she is a leader in women’s studies, particularly feminist theory. Yet one of her greatest legacies is still unfolding—that of helping establish our LGBT Studies Program.”

“She will be sorely missed at Syracuse, where her insightful pedagogy, political acumen, poetic sensibility and keen intellect have touched so many of us, whether as her colleagues or as her students,” May says. “Minnie Bruce’s compelling poetry and essays have amply shown us all how theoretical and creative insights are perhaps most powerful when they are deeply situated within and speak to the lived realities of everyday life.”

Pratt is known for her groundbreaking work in women’s studies—chiefly feminist theory and the intersections of race, gender, class and sexuality; LGBT studies; and creative nonfiction and poetry. At Syracuse, she has been a key architect of the LGBT studies program, which launched in 2006, a year after she arrived on campus, and has helped lead to the University being named one of the nation’s top-50 LGBT-friendly institutions, according to Campus Pride.

Pratt also has co-chaired and keynoted numerous academic conferences; has served as an affiliated faculty member in Disability Studies @ Syracuse; and has lent her expertise to major programs and initiatives, including the University’s Future of Minority Studies Project and the Stone Canoe arts journal, which the YMCA Arts Branch has recently taken over from University College.

She also participates in the International Action Center and is a contributing editor to Workers World newspaper.

Pratt is the author of more than a dozen award-winning or critically acclaimed books, including “The Dirt She Ate: Selected and New Poems” (University of Pittsburgh Press, 2003) and “Crime Against Nature” (Firebrand Books, 1990). An internationally sought-after speaker, she has published dozens of poems, essays and articles, many of which have been anthologized.

Adds May: “Minnie Bruce’s craft as a writer, educator and scholar should be understood as integral to her commitment to liberation politics: she has taught us how art and activism can be deeply interwoven, just as theory and praxis can be bridged to forge generative change.”