Syfy Exec Offers Insight on Diversity in the Media

“Part of the authenticity of television is how relatable it is. I want to feel good watching TV. I want to see faces that look like mine,” says Robyn Lattaker-Johnson, the Syfy VP of unscripted development and current programming, and the former SVP of development and original programming for BET Networks. She continues, “I would like for diversity to mean that it’s OK to have more than one black face on the show.” 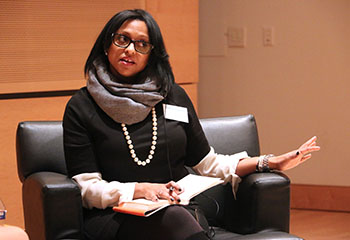 Lattaker-Johnson spoke at the Newhouse School‘s 14th‘s Annual Conversation on Race and Entertainment Media, held on Feb. 11. She offered insight on promoting diversity and equality in the media by sharing her personal experiences as an African American executive in the industry.

She asserts that equal representation is crucial not only from a diversity standpoint, but from a production standpoint as well. A realistic depiction of different ethnicities preserves the program’s believability and, according to Lattaker-Johnson, is a major factor in unscripted programming’s ability to forge a genuine relationship with the audience. She says, “Ultimately, reality is journalism,” and explains the importance of establishing accurate expectations and not disappointing viewers.

Unfortunately, there are many racial roadblocks on both the production and corporate sides of network programming. Lattaker-Johnson recognizes the use of diversity reviews as one source of the problem. Essentially, diversity has been reduced to a checklist that companies have to keep track of; no one lies on the checklists, but people often fill out the list to a satisfactory degree with the basic goal of getting the higher-ups off their back. Lattaker-Johnson believes that these checklists are a distraction from addressing the real issue, and searches for alternative methods to ensure diversity in her programming. “We are actively going out and casting people. That is effective. Not some checklist after the fact,” she says.

Lattaker-Johnson also tells students about a new trend of diversity and inclusion departments being created to tackle issues of race in the media. She fears that in some cases these are just a write-off, meant to act as a smokescreen and provide plausible deniability if the diversity of the company is ever called into question. Moreover, she notices that black executives are almost always promoted or transferred into a management role in these departments, where they may ironically have less influence over diversity and inclusion than in their previous roles.

Lattaker-Johnson has no plan to fade into irrelevance, however. She states, “I am always the one who will speak up. I try to offer alternatives and find solutions. I try to be a leader and set an example.” She states, “I’m definitely here to change the world a little bit. And I know that I have, but there’s more to be done. There’s more that I want to do.”

Lattaker-Johnson cites her work with casts and production teams as being some of the most rewarding experiences she’s had. Speaking about her positive experiences with the casts of different shows, she reflects, “I love the voices, I love seeing people’s transformations, I love the stories. I love being able to be fresh, and I love when there’s something special that I haven’t seen before.” On a day-to-day basis, in addition to working with cast members, Lattaker-Johnson oversees and develops content at the network, working with producers on currently airing shows and collaborating with them in regard to everything from graphics to wardrobe to lighting and set design. She also listens to pitches for potential new shows, negotiating with agents and working to strengthen brand identity.

“When I was in college, I had no idea that this job existed in entertainment. I had no idea that there was such a job as a development executive or a creative executive,” she laughs, reflecting on her successful career in the industry. After graduating from the University of Washington with a B.A. in communications and broadcast journalism, and receiving her graduate degree from the Art Center College of Design in Los Angeles, Lattaker-Johnson made her climb from being a receptionist at a talent agency all the way up to BET and Syfy.

Despite the magnitude of professional pressures, she asserts that doing what you love is the best map to success in any career. She tells students, “Your head, your heart, your gut. That’s where you should go. It’s that simple.”