Daniel Fornari, a world-renowned marine geologist, will headline the annual Chauncey D. Holmes Ceremony and Lecture on Thursday, Feb. 26, at 7 p.m. in the auditorium of the Heroy Geology Laboratory. 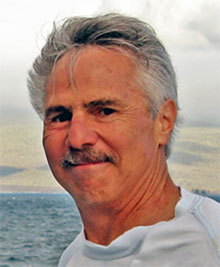 Free and open to the public, the event also recognizes six undergraduates for their excellence in the study of introductory Earth sciences: Gabriel Bravo ’17, Emily Carey ’17, Alaina Hickey ’16 and Nubia Twmousi Dandridge ’17, all of whom are affiliated with the College of Arts and Sciences; and Rachel Dobosiewicz ’16 and Eli Goldweber ’16, both of whom are with the College of Engineering and Computer Science.

For more information, contact the Department of Earth Sciences in the College of Arts and Sciences at 315-443-9289.

“Now more than ever, students need to understand how the Earth works as a system and how humans interact with the Earth,” says Don Siegel, who chairs the Earth sciences department and serves as both the Jessie Page Heroy Professor and a Laura J. and L. Douglas Meredith Professor. “By bringing together biology, chemistry and physics as they apply to the workings of the Earth, students can see the relevance of science to their lives and their communities. This event aims to recognize those students who are already making these intellectual connections.”

Siegel adds that he is excited about Fornari, calling him the “perfect keynote speaker.”

A senior scientist at the Woods Hole Oceanographic Institution (WHOI) in Massachusetts, Fornari will discuss “How and Wet: The Science and Technology of Studying Submarine Volcanism and Hydrothermal Processes on the Mid-Ocean Ridge.” His presentation will draw on his 30-plus years of research on volcanic and hydrothermal processes; high-resolution mapping at mid-ocean ridges; and the structure and magmatic processes occurring in oceanic transforms and at oceanic islands, such as Hawaii and the Galápagos.

Fornari has also participated in over 80 research cruises in the Pacific, Atlantic, and Indian oceans; and has completed over 100 dives in Alvin and other Navy submersibles. Along with fellow WHOI scientist Susan Humphris, he has developed the Dive and Discover website, which brings the excitement of oceanographic science to thousands of students each day.

The Syracuse event is named for geologist Chauncey Holmes G’27, whose primary objective was to foster geologic awareness among undergraduate students. The Holmes award recognizes outstanding students in introductory geology.