Creativity, ambition and storytelling drive senior Aron Romanoff to constantly push himself to the limit in pursuit of his passion. Born in Manhattan and raised in rural Vermont, the College of Visual and Performing Arts film major writes, directs and produces his own films. Romanoff has a 3.7 GPA and spent a semester studying film in Los Angeles, and is also one of a select few students chosen to attend the Sundance Film Festival this year. The students traveled to Park City, Utah along with associate professor of computer art and chair of the Department of Transmedia Heath Hanlin from VPA and assistant professor of television Keith Giglio from the Newhouse School. Romanoff returned with added inspiration and perspective, and immediately dove back into the production of his original films here at Syracuse. 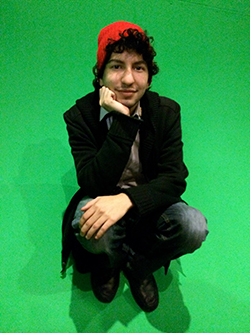 Q: VPA’s film program is very demanding, especially for majors. What are the expectations placed on you, and what are some of the projects you’ve worked on throughout your time at Syracuse?

A: Every year you have to do a film, and every semester you’re working on some big project that’s central to that film. So, everyone’s pretty much constantly working on their own stuff, and also helping each other out if they have time. It’s crazy how busy we are, but it’s all very cool. In terms of my past projects, they’re usually experimental dramas with some sort of fantasy element involved. I’m not heavy on the fantasy, but I like to throw in something that couldn’t happen in the real world to make it a little more interesting. For instance, I made a film two years ago called “Rewound” that opens with a son cleaning out his father’s house after the father has passed away. The son always thought his relationship with his father was strained and distant, but then he finds a collection of trinkets representative of all the happiest times the two had spent together. He also discovers an old tape of him and his father, and when he plays it, he finds himself sucked into the past and dropped back into the moment from the recording. So, there’s your fantasy element. It’s not like he totally resets his life or anything; his dad is still dead and he eventually returns to the present, but he gains new insight and appreciation for their relationship because of the experience.

Q: Sundance must have been incredible for someone who is as involved in the film culture as you are. What was the average day like, and what did you take away from the overall trip?

A: Sundance was such a great experience. We had a list of all the movies, so we would pick out where we wanted to go beforehand. The festival is actually spread out through four cities; half of my selected films ended up being in Salt Lake City as opposed to Park City, including my favorite film from the entire festival. It was called “People, Places, Things,” directed by Jim Strouse, and it was just a simple romantic comedy, but I had a grin on my face from start to finish. The atmosphere of the whole place was great, too. We were in this little village right next to downtown, and even though the weather was very similar to Syracuse, everyone just seemed so happy and involved in what was going on around them. Getting the chance to be a part of that, and to meet and talk to a lot of the Sundance people, was very inspiring. So many of them are fresh out of school, if they even went to school in the first place, and they’re just doing their own thing, trying to get noticed.

Q: Now that you’re back in Syracuse, what are your plans for the rest of your senior year?

A: I’m really focusing on my senior thesis, which is a digital, 15-minute film. Like I said, I try to mix in some fantasy stuff, and I guess that I’d describe the thesis as a romantic fantasy experimental drama, which is a bit of a mouthful. I got started on it really early, and actually filmed a lot of it back in my hometown before I returned to school. The plot centers on a guy with intense social anxiety, and he has this imaginary friend who left him when he was a kid, but then the imaginary friend suddenly comes back when the guy’s in his 20s. Also, the imaginary friend has a girlfriend, who the real guy ends up falling for. And everyone asks me if the girl is real or not, and right now she’s imaginary, but that might change. I’m in the editing process right now, so who knows? The original script is never set in stone.

Q: Once you graduate, what do you see yourself doing?

A: I’ll be spending the summer back in Vermont, working as the tech director for the School of Creative and Performing Arts. It’s a cool gig, and it lets me be at home for a little longer. After that, it’s either LA or New York. I’d love to move out to LA and room with some of the people I’m graduating with, which would make it a little more affordable for all of us, and then see how everything goes. Luckily, I already have some connections out there from the semester I spent in LA last year, so I’m just going to try and work my way up the ladder. I could be a PA for a while, or maybe get behind the camera. Another route would be working on someone’s independent project. With that, there’s less money but a whole lot more creativity. That’s why the people at Sundance were so appealing to me; they made the choice to pursue their own ambitions. Once you graduate and get out there in the business world, it’s always a fine line between a bigger paycheck and more creative control over your projects. You’ve got to find a balance that you’re happy with. Once you get that, everything else comes naturally.

Written by Austin Galovski, work-study in the Office of News Services