Can It! Food Drive Takes Place At Dome This Weekend 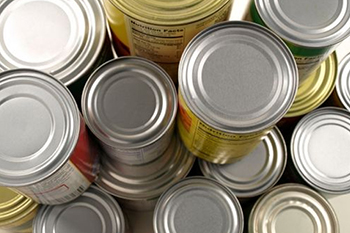 Fans can bring can of food for the Food Bank of Central New York to Saturday’s men’s basketball game against Pittsburgh in the Carrier Dome.

Fans attending the Syracuse University men’s basketball game against Pittsburgh on Saturday, Feb. 21, at the Carrier Dome will not only get an opportunity to watch an exciting game. They will also have an opportunity to combat the problem of hunger in the local community.

“Can It!” is a University-wide interfaith initiative to collect canned food and monetary donations for the Food Bank of Central New York, a United Way-funded agency. The initiative is part of the Better Together: President’s Interfaith and Community Service Challenge in which SU is participating.

Donations of canned goods will be collected at the noon game, and can be deposited in collection receptacles at the gates upon entry. Monetary donations may also be made at the gates or in the back court through the conclusion of halftime.

Over the past three years, the initiative has netted 4,301 pounds of food and $7,478.36 in monetary donations, providing 21,527 meals to hungry people in the local community. The food was distributed to 252 emergency food program partners—food pantries, soup kitchens and emergency shelters—in the food bank’s 11-county service area in Central and Northern New York. At last year’s Can It! event, fans donated more than 1,700 pounds of food.

“The Food Bank of Central New York is thrilled to again partner with the students and staff at Syracuse University for the fourth annual Can It! event,” says Lynn Hy, the food bank’s director of philanthropy. “The food and funds raised during the event will allow us to provide nutritious food to our partner agencies in central and northern New York.”

For more information on the Can It! food drive or Better Together initiatives on the SU campus, contact Hendricks Chapel at 443-2902 or chapel@syr.edu, or visit the Better Together Syracuse Facebook page.