Virtual reality (VR), once the stuff of science fiction, is now poised to move into the mainstream through consumer devices like the Oculus Rift (purchased by Facebook for $2 billion), the mobile phone-powered Samsung GearVR (in partnership with Oculus) and Google’s Cardboard headsets for Android phones. In addition, digital information is moving back into physical space through body-responsive displays and augmented reality headsets. 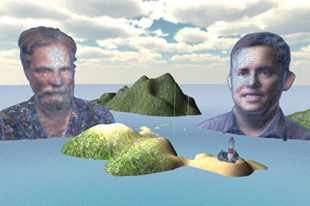 Virtual environments have emerged from the stuff of sci-fi fantasy to here-and-now reality thanks to multimillion-dollar investments from the likes of Facebook, Google, Microsoft and Samsung.

What does this mean for the future of our living rooms, entertainment media and journalism? Will it be long before there’s a virtual headset—or many—in every household? Or 3D-display TVs? Or holodecks?

Three accomplished practitioners will discuss current developments in the field and peer into the future with their presentation “You Are (Really) There*: Virtual Reality, Responsive Environments and Experiential Media” on Wednesday, Feb. 18, from 7:30-9 a.m. in the Joyce Hergenhan Auditorium in Newhouse 3 on the Syracuse University campus.

Speaking and demonstrating will be:

The event—co-presented by Pacheco and Social Media Breakfast Syracuse—is free and open to the public. Light breakfast refreshments will be provided. Parking is available at a reasonable hourly rate in the University Avenue Garage; on-street parking on the University Hill is free through 9 a.m.

Those interested in attending are asked to R.S.V.P. here.