The 10th Annual Cora A. Thomas Gospel Extravaganza, sponsored by the Office of Multicultural Affairs, the Thomas Family, the Gifford Foundation, WAER and Power 620, is scheduled for Sunday, Feb. 22, at Bethany Baptist Church, 149 Beattie St. This year’s concert is headlined by national recording artist Fred Hammond. 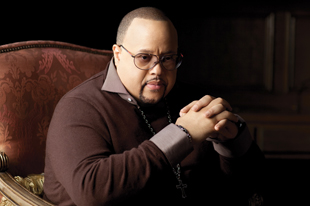 Doors will open at 4 p.m. A free shuttle will also be available for students from Schine Student Center (entrance facing Hall of Languages) at 3:30 p.m. and 4 p.m., and returning to campus at 8 and 8:30 p.m. The event is free and open to the public.

“The Cora A. Thomas Gospel Extravaganza has been an inspiration to the campus and community for 10 years,” says Cedric T. Bolton, coordinator of student engagement in the Office of Multicultural Affairs. “The gospel concert has given the Syracuse community the opportunity to attend a free concert with some of their favorite gospel artists. Fred Hammond came highly recommended for the 10-year celebration and we are excited to have him.”

The Cora A. Thomas Gospel Extravaganza was named in 2005 to honor Cora A. Thomas for her extensive commitment to gospel music. For more than 15 years, her on-air personality has reached across Central New York, working with WPHR Power 106.9 FM, Power 620 AM and WAER FM 88.3. This year’s extravaganza will also include performances by Foundations, the Black Celestial Choral Ensemble, the Cora A. Thomas Workshop Choir, Syracuse University sophomore Miracle Rogers and recording artist Jason Wright.

For more than 33 years, Hammond has been known around the world as a talented songwriter, bassist, vocalist, musical arranger and producer. In addition to serving as the founder and CEO of Face to Face Productions Corp. and founder of the group Commissioned, Hammond is also known for his work with Radical for Christ. These endeavors, combined with his experience as a solo artist, have made Hammond a mainstay on Billboard’s Gospel Chart Top 10, along with frequent appearances on the magazine’s Heatseekers and Music Video Sales charts. As a producer, Hammond has landed the number one spot among gospel producers, according to the Gospel Music Round-Up. Throughout his professional career, Hammond has earned numerous awards and nominations, including Grammy, BET, NAACP Image, Stellar, Dove and GMWA Excellence awards.

The extravaganza is part of the Black History Month celebration at Syracuse University. View the complete calendar of events on the Office of Multicultural Affairs website.