‘The Lubin Legacy: Celebrating 50 Years at the Joseph I. Lubin House’ 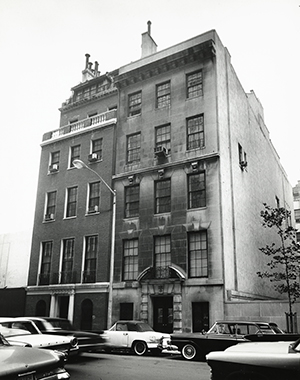 The exterior of Lubin House

In 1965, the Syracuse University Board of Trustees met for the first time at Lubin House, 11 East 61st St., New York City. Joseph I. Lubin, a New York philanthropist had risen from an impoverished childhood in Brooklyn to become a renowned accountant and real estate investor. His close relationship with Chancellor William Tolley led to a lifelong affiliation with the University.

The Palitz Gallery exhibition “The Lubin Legacy: Celebrating 50 years at the Joseph I. Lubin House” is now open and runs through April 9. This exhibition celebrates 50 years at the classic brownstone, and explores the life and philanthropy of Lubin. The exhibition is presented by the Syracuse University Art Galleries in collaboration with SU Archives. The exhibition, open Monday to Friday from 10 a.m. to 6 p.m. and Saturdays 11 a.m. to 4 p.m., is free and open to the public. Palitz gallery at Lubin House, between Madison Avenue and Fifth Avenue.

“The Lubin Legacy: Celebrating 50 years at the Joseph I. Lubin House” includes 17 images and one letter from Lubin to then-Chancellor Tolley. The images were curated by the assistant director of the SU Art Galleries, Andrew Saluti and were drawn from the Syracuse University Archives and the family’s personal collection. To commemorate the anniversary, a special brochure has been written by Barbara Goldsmith, author and Lubin’s daughter.

In the early ’60s, Syracuse University maintained a one-room office at the now-demolished Biltmore Hotel, but had been trying to establish a greater presence in the New York metropolitan area. Knowing that, Lubin donated his townhouse at 11 E. 61st St. to the University. As Goldsmith writes in the anniversary brochure, “There were no central offices, community life, art, lectures, guidance counseling or other amenities that would entice students. Most of all, there was no place for alumni activities.” The contribution of building 11 and later 15 by Lubin was a game changer for Syracuse University. 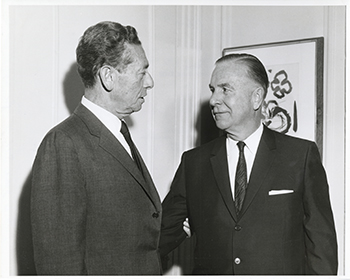 Goldsmith explains, “One spring day in 1944, Joe Lubin brought his daughter for an admissions interview at Syracuse University. On that first-time visit, Joseph I. Lubin embarked on a lifelong friendship with the then-Chancellor, William Pearson Tolley, and a relationship with Syracuse University that endured the rest of their lives.” That was only the beginning of a legacy that has now extended over three generations. Ann Lubin Goldstein’s daughter, Wendy Cohen, and brothers and Richard Goldstein and Steven, also attended Syracuse. Wendy now serves as a member of the Board of Trustees. Barbara Goldstein’s daughter Alice is an alumna, as are several Lubin grandchildren.

But beyond the familial legacy and the donation of the NYC townhouses that comprise Lubin House, the contributions of the family are evident across the SU campus: the collections of the library have been bolstered through the generosity of the Lubin family; so too the renovation of Hendricks Chapel; construction of Manley Field House, Goldstein Auditorium and the Goldstein Alumni and Faculty center. Then there are the gifts that have been directed to several of the schools and colleges, including the College of Visual and Performing Arts, the S.I. Newhouse School of Public Communications and the Whitman School of Management. This support and more has provided positive change to the University landscape and its academics, and it continues to this day.