National Wildlife Federation President and CEO to Speak at Maxwell

Collin O’Mara, president and CEO of the National Wildlife Federation and a 2006 M.P.A. graduate of the Maxwell School, will deliver the next Tanner Lecture on Ethics, Citizenship and Public Responsibility on Monday, Feb. 23, at 5 p.m. in Maxwell Auditorium. His talk is titled “Environmental Citizenship and Ethical Collective Action:  Why Re-establishing America’s Conservation Ethic is a Global Imperative.” 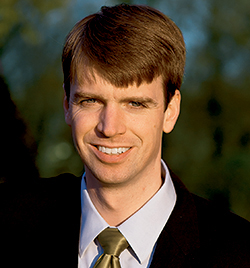 O’Mara has worked in environmental conservation, technology and control for more than 10 years. Before being named president and CEO of America’s oldest and largest wildlife conservation and education organization in 2014, O’Mara had a high-profile career in Delaware state government. He served as secretary of the Delaware Department of Natural Resources and Environmental Control—the state’s top environmental official and, at the time of his appointment, the youngest state cabinet official in the nation.

In this position, O’Mara spearheaded a range of initiatives, including a comprehensive strategy to confront childhood obesity by reintroducing children to the outdoors; a multi-year initiative to expand and connect the state’s trail system; and an effort to establish the region as a world-class conservation and low-impact recreation tourism destination. He also led the largest investment in environmental infrastructure in Delaware history.

O’Mara previously served as the clean tech strategist for the City of San Jose, Calif., where he was the primary architect of San Jose’s Green Vision. He also served as the director of SyraStat for Syracuse, where he oversaw the city’s performance management and accountability program.

A native of Syracuse, O’Mara was a Marshall Scholar at the University of Oxford, University Fellow at the Maxwell School and Presidential Scholar at Dartmouth College.

The Tanner Lecture Series on Ethics, Citizenship, and Public Responsibility provides a public forum for exploring questions about ethical citizenship in provocative and challenging ways.  The series has been endowed byW. Lynn Tanner ’75, founder, CEO and chairman of TEC Canada, a leadership development organization dedicated to accelerating the growth and development of outstanding 21st-century leaders.  The lecture series is coordinated by the Campbell Public Affairs Institute at in the Maxwell School.