Powerball Odds Are Not In Your Favor 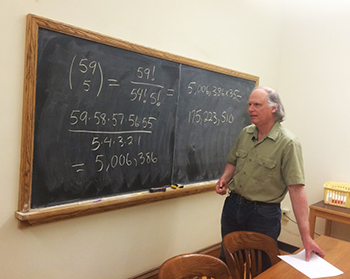 Professor of Mathematics Steven Diaz works on the equation to determine probability of winning the Powerball jackpot.

With a $500 million dollar jackpot at stake, you may be one of the many people lining up to purchase a ticket for the multi-state Powerball jackpot. The thought of instant riches is alluring.

For someone who studies math however, the numbers don’t add up.

Steven Diaz, professor of mathetmatics in the College of Arts and Sciences, crunched some numbers, and says the odds of choosing the right combination of numbers is roughly 175 million to one. “That’s a little more than half the population of the United States,” says Diaz, who adds, “The odds are pretty bad, so in terms of investing your money, it’s probably not the best way to go.”

Diaz pointed out that, numerically speaking, it’s conceivable someone could purchase enough tickets in every possible number combination. If you were the sole winner, it would be a good investment. The problem is, according to Diaz, the more people who play, the stronger the likelihood there will be multiple winners, reducing the winnings by at least half.

So, while long lines persist at Powerball vendors, you won’t find Diaz waiting in one. Besides, he said jokingly, “There’s too much stress waiting to see if I’ve won.”