Fans Invited to Give to United Way Before, During Duke Game

Before the Syracuse University men’s basketball team tips off against Duke Saturday, Feb. 14,  at 6 p.m., fans approaching the Carrier Dome will have an opportunity to donate to the United Way of Central New York. More than 50 student volunteers from the University’s fraternities and sororities will be stationed at Carrier Dome entrances, on the Quad and across campus wearing bright United Way caps and holding orange buckets, greeting fans and soliciting donations for the United Way. Patrons who donate will be investing in the 91 local programs and services at 32 local agencies funded by the United Way of Central New York. 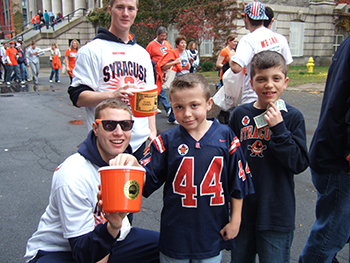 Students collect donations during a previous Dollar Day at the Dome event.

Dollar Day gives students an opportunity to participate in the University-wide campaign, and raise funds for the community.

“Students will be out 90 minutes before tipoff and stationed at key areas, collecting donations from fans,” says Peg Northrup, campaign and event manager. “We want to encourage fans to look for the orange United Way buckets and help us help our community.”

During the game, fans will notice a new United Way presence within the Carrier Dome. As the University’s official community partner, United Way has messages featured on the video boards and in audio announcements; volunteers host a booth in the back court where fans can obtain a game towel for a donation. Concession stands, merchants and Club 4.4 are equipped to accept fan donations electronically with each transaction, cash or credit. The merchant and concession promotion is new and invites all fans to be a Game Changer for the local community.

“The Duke game presents a terrific opportunity for the University to partner with our fans to make a difference in this community,” says Northrup. “Imagine if every fan attending gave just a dollar? Imagine what that would mean to local nonprofit programs.”

University College Dean Bea González serves as chair of the 2014-15 campus campaign, Participate with Pride. González leads a cross-campus committee of more than 15 area chairpersons and dozens of employee volunteers who help publicize the campaign and communicate the benefits of participation.

For more information on Dollar Day at the Dome, the Game Changer concession promotion or the campus campaign, visit http://uw.syr.edu or contact Northrup in the Office of Government and Community Relations, at 443-5303.