Martin N. Bandier ’62, chairman and CEO of Sony/ATV Music Publishing, was honored with the Recording Academy’s President’s Merit Award on Feb. 7 at the Pre-Grammy Gala hosted by Clive Davis in Beverly Hills, Calif. Presented the night before the 57th annual Grammy Awards as part of the academy’s 2015 Grammy Salute to Industry Icons, the award recognizes Bandier’s significant contributions to the music industry and his numerous philanthropic endeavors. He is the first music publisher to receive the award. 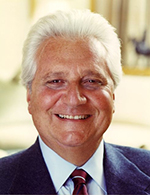 “This year, we are especially proud to honor our first music publishing industry icon, Martin Bandier—a luminary whose passion, vision and innovation, combined with his championing some of the world’s greatest songwriters and his tireless work to maximize the value of musical compositions, has helped to shape our musical landscape for decades,” said Neil Portnow, president/CEO of the Recording Academy, when the award was announced last November.

Bandier assumed the position of chairman and CEO of Sony/ATV Music Publishing in 2007 and oversees its global music publishing activities, including talent and copyright acquisitions, day-to-day operations and the development and implementation of the company’s long-term strategic initiatives. In this role he stands as a passionate advocate for songwriting rights, leading the industry fight for fair-market royalty rates.

Bandier is a trustee of Syracuse University and a 1994 recipient of the Arents Award, the University’s highest alumni honor. A graduate of the College of Arts and Sciences, he founded the Bandier Program, a multidisciplinary music and entertainment industry degree program based in the College of Visual and Performing Arts.

“Syracuse University and the Bandier Program are bursting with Orange pride over Martin Bandier’s President’s Merit Award,” says David Rezak, director of the Bandier Program. “This is long overdue recognition that Marty’s vision and acumen have changed the music publishing world. Marty’s position that the song and composer are the central, foundational elements of the music business is validated by this award.”