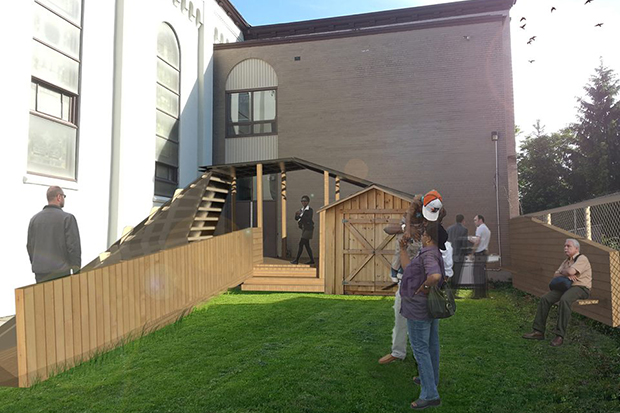 When architecture students in Freedom by Design took on the task to create a handicap-accessible ramp at the Westminster Presbyterian Church, they decided to expand on the concept.

Members of the School of Architecture student organization are constructing the ADA-compliant ramp, along with a shelter from snow and icicles, outdoor storage and community spaces, including seating and a barbecue area.

The project, named “Into the Fold,” started last fall with groundbreaking for the ramp at the church on the North Side of Syracuse and will continue this spring to put in the pre-fabricated elements.

The project is a way to both work with the community and test their classroom skills.

“For some of us, it was the first time doing a real build, so we had to account for mistakes,” says Ruo Piao Chen ’17, director of Freedom by Design. “For example we rented a two-man auger to dig the holes one time on site. The foundation is really rocky, and we ended up actually having to dig the holes ourselves.”

Project manager Stephen Muir ’17 was familiar with the notion to expect the unexpected.

“When it comes to construction, there are a lot of things that can go wrong, so you have to find ways around the problems you thought you’d never have,” Muir says. “My father is general contractor, and he’s been helping me along the way.”

Freedom by Design, part of the American Institute of Architecture Students, designs and constructs projects that assist people with disabilities. Its members also raise money to fund the project.

This latest project was first developed by a cohort of Freedom by Design students who had also been involved in a prior project, the Play Perch at Jowonio School.

“The students didn’t have as much time as they wanted to dedicate to this project so when we took over, we only had rough ideas,” Chen says. “We ended up starting from scratch.”

The students visited the site and worked closely with their faculty advisor, Associate Professor Larry Bowne, who helped them elevate their design.

“Initially it was going to be a ramp, but because our mentor really pushed us, the students that were doing the design actually tried to make it into something that was more than just letting people access the building,” Chen says. “It was helping protect people from falling icicles, having storage units and having other public spaces to create more of a community space for the church.”

The students also consulted closely with the Rev. Patricia Simmons and the church’s treasurer, Bob Conine, on the needs of the church.

A team of three students—Jon Anthony, Armand Damari and Tiffany Pau—worked on the design. “They had to consider all the restrictions of both the city and the building codes,” Chen says. “Our faculty mentor dedicated a lot of time reviewing the documents and also giving us advice during two-hour review sessions every week at one point. The students worked through process and we’re really proud of them.” 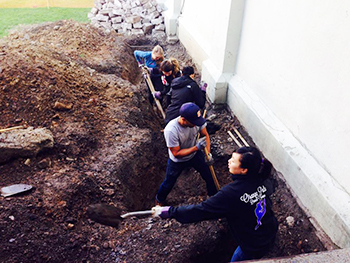 Members of Freedom by Design get down and dirty working on the site of Westminster Presbyterian Church’s future handicap-accessible ramp.

The Freedom by Design students also raised about $10,000 for the project, through fundraisers, grants, a crowdfunding website and a grant from the Fast Forward competition. The competition, which was part of Chancellor Kent Syverud’s inauguration last spring, provided funding to several student projects.

When they broke ground last fall, an initial problem was the amount of backfill, such as rocks, wood and steel that had been buried in the ground from previous projects. “We had to do a lot of manual labor to accommodate that,” Muir says. But they’ll be back at the site this spring and expect to have the majority of the project done by April.

At this time, parts of the installation—made of lumber, polycarbonate and galvanized steel—are being pre-fabricated in the workshop at the School of Architecture.

As the process continues, Muir has taken away from the experience the understanding that the plans you have on paper may not be the way things out. He’s also grateful to have been part of the Freedom by Design team. “I wanted to be part of the organization because it’s great to help the community and it’s something I’d love doing in the future,” he says.

Chen has learned that communication is the most important thing for the leader of an organization. “If you don’t communicate, everything can fall apart,” Chen says. “Communication is key because people are always willing to help out; you just have to be able to connect with them.”

Freedom by Design is looking for more people who are interested in working on the project. For more information, contact Chen at rchen27@syr.edu or Muir at smmuir@syr.edu.