One of Europe’s leading contemporary philosophers and feminist theoreticians is giving two lectures at Syracuse University.

Rosi Braidotti, Distinguished University Professor and founding director of the Centre for the Humanities at Utrecht University (Netherlands), will discuss “The Political: What Does Pussy Riot Know?” on Thursday, Feb. 12, from 3:45 to 5:15 p.m. in the Peter Graham Scholarly Commons (room 114) in Bird Library. The lecture is hosted by Vivian May, associate professor and chair of women’s and gender studies in the College of Arts and Sciences. 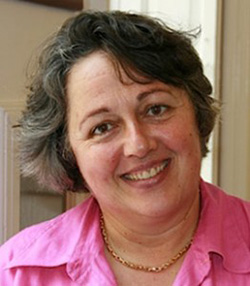 The following day, Braidotti will deliver the Central New York Humanities Corridor Seminar titled “The Posthuman.” It will be hosted by Gregg Lambert, director and principal investigator of the CNY Humanities Corridor, as well as Dean’s Professor of the Humanities, and will take place from 9 a.m. to noon in 304 Tolley Humanities Building. The seminar is part of the 2015 Spring Symposia, presented by the Syracuse University Humanities Center in the College of Arts and Sciences.

Both events are free and open to the public; however, registration is required for Friday’s seminar. For more information and to register, contact Mi Ditmar by Monday, Feb. 9, at mmditmar@syr.edu or 315-443-5944.

Braidotti is this semester’s Mellon Distinguished Visiting Collaborator. Her weeklong residency is co-organized by the CNY Humanities Corridor, a large-scale partnership funded by the Andrew W. Mellon Foundation; and the Society for the Humanities at Cornell University, where she is participating in several events, including a public lecture on Wednesday, Feb. 11, from 4:30 to 6 p.m. in the Guerlac Room of the Andrew Dickinson White House (27 East Ave., Ithaca).

“Professor Braidotti is one of today’s most brilliant and provocative thinkers,” says Lambert, who recently served as a Visiting Distinguished Professor at Utrecht. “By combining theoretical concerns with socially and politically relevant scholarship, she forces us to re-examine our concept of humanity. This qualitative shift in thinking, which she calls the ‘posthuman predicament,’ is the result of rapid contemporary scientific advances and global concerns.”

Lambert has worked extensively with Braidotti over the past five years, during his previous appointment as founding director of the Humanities Center. Chief among their collaborations were two digital humanities programs co-sponsored by the Perpetual Peace Project–a joint initiative involving the Humanities Center, the Slought Foundation in Philadelphia and the European Union National Institutes for Culture in Brussels.

Born in Italy and raised in Australia, Braidotti has held multiple appointments at Utrecht, including as founding director of the Netherlands Research School of Gender Studies, as well as professor and chair of the Graduate Gender Programme. She is the author of more than a half-dozen books, including the critically acclaimed “The Posthuman” (Polity, 2013). Her honors and awards include an honorary fellowship in the Australian Academy of the Humanities and a knighthood in the Order of the Netherlands Lion. She earned a Ph.D. in philosophy from the Paris Sorbonne University.

May considers Braidotti a pioneer of European women’s studies, with a flair for the contemporary that is virtually unmatched. “Her Thursday lecture will examine how Pussy Riot is used as a feminist means of protest,” says May. Pussy Riot is a Russian punk band whose members were sentenced to two years in prison after performing a protest song inside a Moscow cathedral. “Competing issues of free speech and religious sanctity are at the heart of their trial.”

Gerald R. Greenberg, interim director of the Humanities Center and a senior associate dean of the college, is also excited about Braidotti’s visit: “Her seminar on Friday will look at how genetically modified foods, advanced prosthetics, robotics and other reproductive technologies are blurring the lines between human and non-naturalistic human structures.”