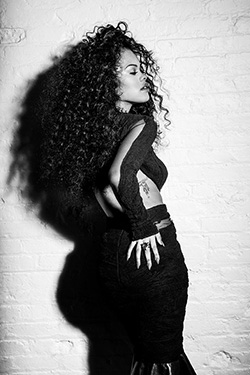 The headliner and hostess is Teyana Taylor. The R&B songstress/actress was featured on the MTV reality series My Super Sweet 16, and she was also a leading vocalist on Kanye West’s “My Beautiful Dark Twisted Fantasy.” Taylor’s song “Google Me’ was among Billboard’s Hot R&B/Hip-Hop Songs in 2008, and she is now a major solo artist with her debut album, “VII,” which was released in 2014.

Also performing will be two-time Emmy Award-winning violinist and author Damien Escobar, who is known for his blends of hip-hop and classical melodies. Escobar debuted his single “Freedom” on Katie Couric’s talk show, and has made television appearances on CNN, NBC and other major media networks. Star of Comedy Central’s “Lavell Crawford: Can a Brother Get Some Love,” Lavell Crawford will perform as well. The comedian is best known for his character Huell in the television show “Breaking Bad,” and has had regular guest appearances on “Chelsea Lately.” Also sharing the stage will be MTV’s “America’s Best Dance Crew” season three winner, Quest Crew. Special guest No Mercy Step Team is a national Phi Beta Sigma Inc. professional step and performance company.

Tickets are available at the Schine Box Office: $6 with I.D. for SU students and $8 for non-SU students. For more information, contact Theta Xi President Travis Davis at tadavi05@syr.edu. More information about the “Saturday Night Live: the Showcase” and the Theta Xi Chapter can be found on Facebook and the chapter’s Instagram and Twitter @pbstheta_xi.

The Wonder Years, the 1980s television show evoking nostalgia in many Americans for decades, is finally back on television screens, but this time with greater impact. The 2021 reboot of the class show features a Black family, the Williams, set…

Becoming Proactive Rather Than Reactive When It Comes To Mental Health

Kenneth Marfilius, visiting teaching professor in the Falk College School of Social Work, was quoted by The 19th, “I just see nothing but voids’: As combat ends, women veterans fight trauma and grief.” Marfilius discussed mental health issues among veterans and…

Carol Liebler, communications professor in the Newhouse School, was interviewed by for the BYU Radio program “Top of Mind with Julie Rose” for an episode entitled “White Women Aren’t the Only Ones Going Missing” and was a guest on Reality…

Sharif Bey, associate professor in the School of Visual and Performing Arts, was featured in The Pittsburgh Post-Gazette’s article “In ‘Excavations,’ Sharif Bey unearths his roots and shows what a Beltzhoover ‘art kid’ can do” and by WESA-FM (Pittsburgh). Bey…

Gregory Germain, professor of law and director of the bankruptcy clinic, was interviewed by CBS News for the story “Bankrupt companies gave $165 million in bonuses to top execs before going belly up last year.” Germain, an expert on bankruptcy,…