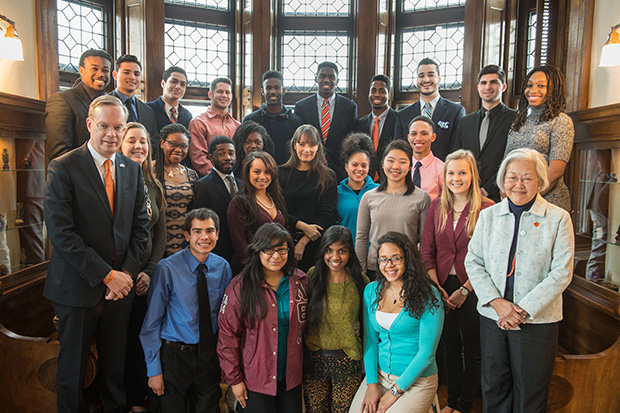 The power of one phone call.

Would pioneering inventor Alexander Graham Bell, who patented the first telephone in 1876, ever know the impact it would have on individual lives?

Pedro Bringas, a senior television-radio-film major from Miami and Posse Scholar, asked that question on Wednesday to those gathered at the Chancellor’s House to welcome Posse Foundation President and Founder Deborah Bial to Syracuse University.

Syracuse Posse Scholars and their mentors, deans, faculty and staff joined Chancellor Kent Syverud at a luncheon to kick off Bial’s visit. She was joined by Matt Fasciano, Posse’s chief operating officer and Rassan Salandy, the foundation’s vice president for external affairs. Chancellor Syverud extended the invitation to visit Syracuse last fall, when he met with Bial at the Posse Foundation offices in New York City.

Posse is a national initiative with chapters in Atlanta, Boston, Chicago, Houston, Los Angeles, Miami, New Orleans, New York and Washington, D.C. Syracuse is one of 51 colleges and universities across the country that partners with Posse to commit four-year, full-tuition scholarships to Posse Scholars. The majority of partner institutions host one or two Posses.

Syracuse University welcomed its first cohort of Posse Scholars in 2012. Since then, a total of 91 Posse Scholars from Atlanta, Los Angeles and Miami have come to Syracuse to pursue their degrees.

The University recently refocused its efforts with the Posse Program with plans for fall 2015 calling for continued support of both the Miami and Atlanta-based programs, serving 20 new students.

In his welcoming remarks, Chancellor Syverud spoke of his pride in the Posse Scholars and their many accomplishments, and of the University’s commitment to continuing to build a strong and diverse student body.

Bringas received his life-changing phone call in December 2011, and came to Syracuse the following fall in the University’s first cohort of Posse Scholars. As a native of Florida, he had never seen snow before coming to the “315.”

“For a while, I did not like the place. … It’s not like Miami,” Bringas said, noting the cold and lack of palm trees. “The only moment I felt at home was when I was with my Posse.”

It was with his fellow Syracuse Posse Scholars that he first shared his everyday college experiences and accomplishments, from his grades to joining the club volleyball team to class projects.

The Posse Scholars, he said, bring tremendous talents and qualities to Syracuse and are “an incredible asset to the advancement of the University.”

In turn, the Posse Scholars have been given the chance to make a global impact. “We have the capacity to change the world, to go out and make it happen,” Bringas said.

Bial said that Posse is not a program, but a social justice initiative to build a new kind of leadership network that is diverse. “By 2020, there will be more than 6,000 of you in the workforce. You will be CEOs, running hospitals, newspapers …you will be the leaders this country needs so that the voices of all are represented.” She noted that one of the first Posse Scholars is on track to become a university president.

She noted that currently, 94 percent of the members of the United States Senate are white. “It shouldn’t be like that,” she said.

Bial spoke of the quality of Posse Scholars. This past year at Posse, there were 16,000 nominations for 700 spots. “You are making an incredible difference and we are proud of you,” she said.

“We believe in you in a very, very deep way,” she said. “We didn’t think you could just make it, but that you could knock it out of the park.

Bial said that she and Chancellor Syverud are continuing to engage in conversation on keeping the Syracuse-Posse partnership sustained and strong.

Following the luncheon, six students showcased the skills and talents they have developed and honed as Posse Scholars at Syracuse University.

“Our Posse students are all engaged, making a difference and doing amazing things on our campus and in our community,” says Andria Costello Staniec, associate provost for academic programs and Syracuse University Posse liaison.

Marius Jackson, a junior industrial design major in the College of Visual and Performing Arts and member of Atlanta Posse 1, talked about his work with the Cauich Canal Project in Mexico. Inspired by a guest lecture in an anthropology class, Jackson designed his own internship and found funding. He spent a month in Mexico, lending his design talents to a project to unearth an ancient Mayan canal.

Quameiha Raymond-Ducheine, a junior in the S.I. Newhouse School of Public Communications and member of Atlanta Posse 1, shared a clip of a fiction film she created (which included work by fellow Posse Scholars). She has traveled to India to work on a documentary and is currently working on finding funding for a documentary on families affected by cases of police brutality.

Collin (CJ) Robinson, a sophomore in College of Visual and Performing Arts and member of Atlanta Posse 2, performed a popular opera piece, “Torno A Surriento.” Taryne Chatman, a freshman in the College of Arts and Sciences and member of Los Angeles Posse 3, performed an excerpt from the Atlanta Cotton States and International Exposition speech delivered by Booker T. Washington in 1895.

Bolton, a freshman in the College of Engineering and Computer Science, ended the presentations with a performance of R. Kelly’s 1997 song, “I Believe I Can Fly.”