Hall of Languages to Glow Red for American Heart Association

The Hall of Languages will be aglow in red lights on the evenings of Thursday, Feb. 5, and Friday, Feb. 6, as part of the campus’s Orange Goes Red for the American Heart Association (AHA) campaign. Friday marks the 11th anniversary of the AHA’s Go Red for Women campaign, and is also National Wear Red Day. 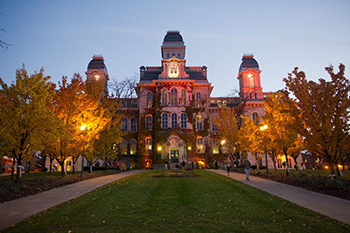 The Hall of Languages glows red for a previous Orange Goes Red campaign.

National Wear Red Day—the first Friday in February—brings attention to cardiovascular disease in women by encouraging everyone to wear red and take positive action to live longer, healthier lives. Fundraising and awareness events are scheduled to take place in various departments and buildings on campus.

Some form of cardiovascular disease affects more than one in every three adult Americans. Many suffer terribly from disabilities caused by these diseases.