Jason Sutter began playing the drums at the age of 9 and played his first professional gig at 10. Since then, he has toured with Smash Mouth, Marilyn Manson and Foreigner, just to name a few. The next stop on his “tour” is a bit more local, though; he’ll appear at Syracuse University for a three-part series on Tuesday, Feb. 10, and Wednesday, Feb. 11. 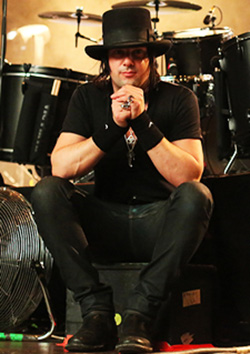 Sponsored by the Bandier Program and the Setnor School of Music in the College of Visual and Performing Arts and the Department of Art and Music Histories (AMH) in the College of Arts and Sciences, all events are free and open to the public. For more information, contact Theo Cateforis, associate professor and chair of AMH at tpcatefo@syr.edu.

“Jason is one of the most highly-regarded drummers in the music business and I am thrilled that the students of Syracuse University will have access to someone of his caliber,” says Cateforis, one of the organizers of Sutter’s visit. “There’s more to music than just being a great musician, and what I love about this event is the fact that Jason will cover such a wide array of topics pertinent to the music industry and rock music history.”

A Potsdam, N.Y., native, Sutter earned a master’s degree in orchestral percussion from the University of Miami. While a graduate student in Miami, Sutter got his big break, landing his first tour with recording artist Juliana Hatfield. He went on to record and tour with dozens of artists, including Letters to Cleo, Jack Drag, Chris Cornell and the Rembrandts. Sutter was also an original cast member and musician for the hit Broadway musical “Rock of Ages,” a show he was instrumental in developing.