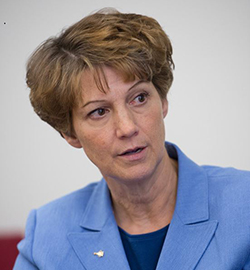 Feb. 3, 1995, is a day Eileen Collins ’78 is unlikely to forget. It was on that day that Collins piloted the shuttle Discovery into outer space and into the history books all at once. Collins became the first female to pilot a shuttle mission. She was named a shuttle commander four years later.

Collins can be considered a hero. NASA has bestowed nearly a dozen service awards on her. She’s a member of the National Women’s Hall of Fame. She even has a road in Syracuse leading to Hancock Airport named in her honor. In 1996, Collins was named the winner of a George Arents Award.

In addition to her other  accomplishments, Collins is a military veteran. She’s achieved the rank of colonel in the U.S. Air Force, and has helped pave the way for women in the field of aviation. Her story is truly unique and truly Syracuse University. It’s featured on the Institute for Veterans and Military Families website. It’s the story of a legacy that will last “to infinity to beyond.”