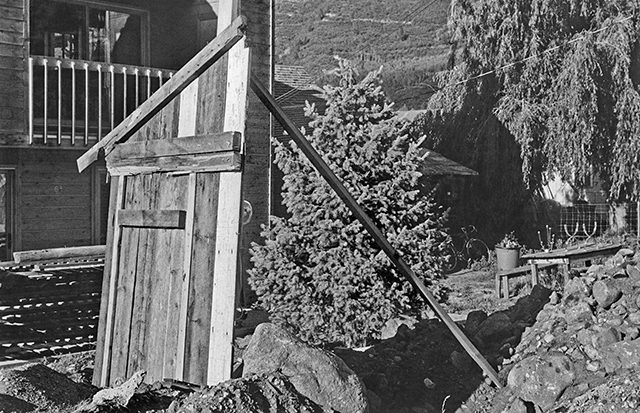 A work from Gary Metz’s “Quaking Aspen: A Lyric Complaint”

Light Work will present “Quaking Aspen: A Lyric Complaint,” featuring the work of photographer Gary Metz at the Robert B. Menschel Gallery in Schine Student Center from Feb. 1 through June 30. The exhibition is curated by Stephan Apicella-Hitchcock and Joe Lawton; and made possible by Lawton, Apicella-Hitchcock, Fordham University and Metz’s estate.

In the 1970s, the late photographer and educator Metz generated a significant body of work that was very much in the spirit of the times. Metz’s “Quaking Aspen: A Lyric Complaint” challenged the first 100 years of landscape photography, which had placed a major emphasis on depicting nature as sublime, heroic and unspoiled. Unlike previous photographers who glorified nature, Metz and his contemporaries wrenched photography out of the national parks and replaced the scenic with the vernacular of the everyday American landscape.

A number of Metz’s colleagues received wide recognition for their similar investigations culminating in the seminal 1975 exhibition “The New Topographics: Photographs of a Man-Altered Landscape” at the Museum of Photography at the George Eastman House. Metz never received the same level of acknowledgement. Now, 40 years later, his “Quaking Aspen: A Lyric Complaint” is as powerful and relevant as ever, resonating with current interests in ecology and the everyday landscape.

Metz spent the month of August 1985 as an artist-in-residence at Light Work. Working with negatives made from 1970-1983 in Aspen, Colo., Metz virtually completed a first editing stage of a body of work that was an ongoing study of physical and social transformations specific to Aspen, but also representative of processes occurring throughout North America at the time. “The month at Light Work has enabled me, at last, to gain a sense of resolution of the material I’ve made over 13 years and to see where to take the work next,” said Metz at the time of his Light Work residency. This body of work evolved to become “Quaking Aspen: A Lyric Complaint.”

Metz was the was a professor at the University of Colorado, Boulder, director of Education at the International Center of Photography and head of the photography department at the Rhode Island School of Design. He received NEA fellowships in photography, 1972 and 1980, and is represented in various collections including the Museum of Modern Art in New York, George Eastman House in Rochester, N.Y., the National Gallery of Canada and the Visual Studies Workshop in Rochester.