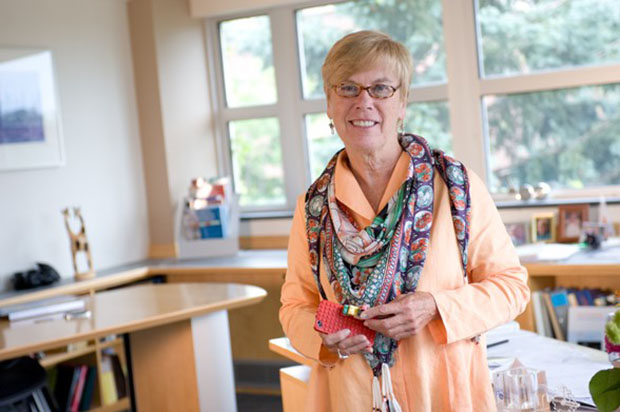 Liz Liddy has been at the iSchool for 25 years. Now she has moved on to serve the larger campus.

As dean of the School of Information Studies (iSchool), professor and mentor, Liz Liddy has forged close connections to many students during her 25 years at the iSchool.

She’s taught graduate students in courses in information retrieval, natural language processing and data mining; advised Ph.D. candidates; and mentored entrepreneurial students in the Student Sandbox, along with building the prestige and work of the iSchool as its chief champion.

“I love the students and I’ve always known and been close to a lot of them,” Liddy says.

In her new role as interim vice chancellor and provost, Liddy will impact an even greater number of students—across campus and possibly for decades to come—not only as the senior academic officer but also as she takes the lead in the development of Syracuse University’s Academic Strategic Plan.

Liddy, who began her position Jan. 1, was appointed by Chancellor Kent Syverud in December following Eric Spina’s decision to conclude his tenure as vice chancellor and provost.

“My major focus is on the Academic Strategic Plan—one of the three elements of Fast Forward Syracuse,” Liddy says. “It focuses on the whole purpose of the University. It looks at undergraduate, graduate and professional education; faculty; and research.”

The development of the plan is a major undertaking overseen by the Strategic Plan Steering Committee, facilitated by Liddy. Under the steering committee, seven working groups are looking at key areas of the University, such as undergraduate excellence, research, and veterans and military affairs, to recommend strategies for improvement and areas of distinction to frame the strategic plan.

With 28 members on the Steering Committee, 123 people involved in the working groups and more than 1,000 ideas and feedback from the campus community, Liddy is impressed by the number of people—students, faculty and staff—who are involved and their commitment, ideas and hard work to assist in this critical effort.

“Different people from different schools have come together on this common goal. They are working superbly together and they enjoy it,” Liddy says. “It’s a lot of work but it shows they are engaged in a challenge that is important to them and something they care about. I think we’ll get some amazing results.”

The Steering Committee is finishing up its discovery phase, which Spina led in the fall. “We’re at the point where we’re seeing what we’ve learned and can now look at what are the goals and how can we accomplish these goals,” Liddy says. 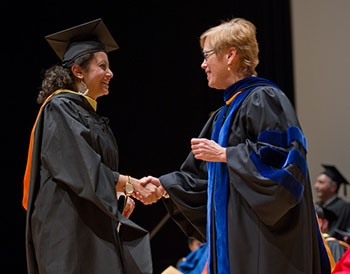 Liddy shakes hands with a student during an iSchool convocation. She forged close relations with many students during her years as a professor and dean.

Along with her work with the Steering Committee, Liddy is also learning the work of the University’s highest academic officer, overseeing the work of the schools and colleges, as well as dealing with such matters as recruitment and enrollment.

“There are so many sides of this role, so I’m in a substantial learning curve,” Liddy says.

For Liddy, that’s the best part.

“I love to learn; it’s really exciting to me,” Liddy says. “There are many aspects of the University that I wasn’t deeply familiar with. I’m meeting and working with so many more faculty than when I was dean. All of it is forever broadening my horizons.”

Liddy started teaching at Syracuse in 1988, the same year she earned a Ph.D. at the iSchool. In 1999, she was named founding director of the iSchool’s Center for Natural Language Processing, which advances the development of human-like language understanding by software capabilities. She is the founding faculty advisor of Women in Information Technology, a student group that supports and mentors female IT students, and is an active member of the National Center for Women in Information Technology.

Liddy holds eight software patents, has led 70 research projects and authored more than 110 research papers. In 1994, Liddy founded and led a software startup company, TextWise, with her son John, who is an M.B.A. graduate of the Whitman School of Management and the director of the Student Sandbox and entrepreneur in residence at the Syracuse Technology Garden.

In 2008, Liddy was appointed dean of the iSchool, a place she describes as one of vigor and excitement.

“There is an esprit de corps in the school that I was able to support and grow,” says Liddy, who also has two daughters, Jennifer, who earned a master’s degree at the iSchool, and Suzanne. “The school has grown; our rankings are great; student placement rate is great; and everyone is quite energized, and you can feel it.”

She notes the creation of the iSchool’s various spaces and centers, like the NEXIS lab focused on emerging technologies and the ICE Box collaborative space; a curriculum that has been attuned to recognizing new areas of study, including data science; and a focus on entrepreneurship that all contribute to the vibrancy of the iSchool.

On a larger scale, in the highly competitive higher education environment, it’s important for the University to be nimble as well.

“Higher education is moving very quickly and we have to stay attuned. There’s a lot of people who would be interested in learning what we teach, but we have to figure out what are the right programs, how do we deliver them,” Liddy says. “Some people may not want full degrees; they may want certificates of advanced studies, or may just want to take one or two courses and do it online.”

Those ideas are being explored as part of the Academic Strategic Plan, in the Fast Forward Syracuse working group on Professional Program Excellence.

Although her new role comes with differences and new challenges, such as leading the development of the Strategic Plan, Liddy finds many similarities to her past leadership roles.

“Leadership is a lot about energizing people, getting their buy in, rewarding them and seeking and hiring good people,” Liddy says. “There are obviously differences in running a company and operating a school, but a lot is similar. You have something to offer and you have people—students—who might be interested; it’s about making your product really good and getting your message across to them.”