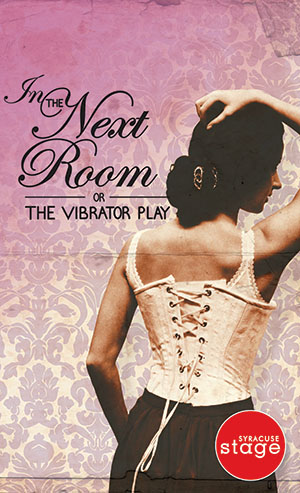 Following its Broadway premiere at Lincoln Center Theatre, “In the Next Room” was a finalist for the 2010 Pulitzer Prize for Drama, and received a 2010 Tony nomination for Best Play. In 2014, playwright Ruhl was the second-most-produced playwright in the nation. A recipient of a MacArthur Fellowship, Ruhl is known for writing adventurous plays that tackle difficult subjects with a sense of humor and heart.

“In the Next Room” was inspired by a history book called “The Technology of Orgasm” by Rachel P. Maines, currently a visiting scientist at Cornell University. Maines’ book examines the medical condition known as hysteria, and various methods of treatment prescribed by physicians through the centuries. Hysteria was a misguided, catch-all diagnosis that in truth was mostly the normal functioning of female sexuality. [Note: Maines will be the featured speaker for Syracuse Stage’s Wed @1 Lecture Series on Feb. 4.]

“I was so shocked and fascinated to find out that doctors treated women with vibrators in the 19th century for hysteria,” says Ruhl. “Reading historical accounts, these men were not perverse. They genuinely wanted to help these women, and in a way you have to believe that they did, even as weird and misguided as it seems today … Once I started writing, the characters came to me, and then the relationships got complicated and entangled.”

The setting of “In the Next Room” is “a prosperous spa town outside of New York City, perhaps Saratoga Springs,” giving Ruhl the opportunity to offer a glimpse of 19th century life in America. Language is spare and polite. Victorian dress is splendid and restrictive. The characters are living post-Civil War at the dawn of electricity.