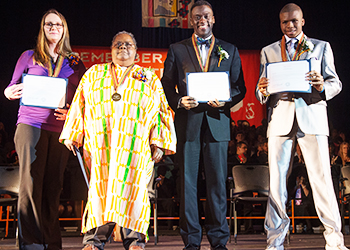 The awards are presented annually to people who, in the spirit of King’s “beloved community,” have made a positive difference in the lives of others but who are not widely recognized for their efforts.

Dajaveon Bellamy—Community Youth Award
Dajaveon Bellamy, 15, a student at Cicero-North Syracuse High School, has been diagnosed within the autism spectrum of a learning disability. He continues to push through challenges and stigmatism though, says Jacqueline Spears, who nominated him for the award. “He continues to pursue building his character and helping others along the way,” says Spears.

“Although Dajaveon struggles with socialization, he continues to push through to gain strength and develop his identity.”

Bellamy has been a karate student for three years and is one belt away from receiving a black belt. He also serves as a lead team member for karate demonstrations and is a member of the Abundant Life Christian Center’s Velocity Youth Ministries.

In the community, he has gone above and beyond to help those in need. Over the past year, Bellamy has collected toiletries for Catholic Charities’ men’s homeless shelter in downtown Syracuse. He secured a commitment from a local organization to provide a meal once a month at the shelter, and continues to seek sponsorship for daily meals there. He is also collecting men’s gloves, hats and socks to be distributed during the cold weather season. He has also collected school supplies for the Africa Bound organization.

“As a young teen, Dajaveon exemplifies going above and beyond for the brotherhood of humanity,” says Spears.

“As a freshman, Ronald was the rare student who had the time management skills to excel in the classroom while also thriving in his extracurricular pursuits,” says James K. Duah-Agyeman, director of the Office of Multicultural Affairs (OMA), and Huey Hsiao, associate director of OMA, who jointly nominated Taylor for the award. “Ronald’s summa cum laude grade point average speaks for itself and demonstrates his commitment to personal excellence. However, what impresses us the most about Ronald is his modesty and selfless actions. His extracurricular interests are not just about personal gain, but demonstrate a passion for service to others less fortunate and to social justice.”

Taylor started a mentorship program at the Wilson Park Community Center in 2011. He serves as a role model and mentor for the men of color on campus through MEN, and has participated in the Institute for Responsible Citizenship. He interned for the White House Initiative on Educational Excellence for African Americans in 2014. He has organized numerous events on campus to bridge gaps and start dialogue. Most recently, he was a prominent student voice behind a University-wide open forum on diversity and inclusion.

Taylor, of Hempstead, N.Y., is a senior majoring in political science and policy studies in the College of Arts and Sciences and the Maxwell School of Citizenship and Public Affairs, and a 2015 Senior University Class Marshal. He is a member of Alpha Phi Alpha Fraternity, Inc., Creations Dance Company and the Black Celestial Choral Ensemble.

Mable Wilson—Community Adult Award
Mable Wilson started gardening while growing up in the home of her foster parents in White Plains, N.Y. The garden gave her respect for the soil, the ability to produce food, and a sense of peace. Planning each year’s garden, and developing the skill of strategizing, helped her to win a scholarship to Marymount College, where she was one of the first African American students at the school. There, she learned to me more intentional in her approach to advocacy and community organizing.

Concerned that many families in Syracuse do not have enough healthy food to eat, Wilson helped to start and rehabilitate the West Newell Street Community Garden, which grows fresh vegetables for neighborhood families and provides hands-on experience for young people. She then helped to organize Syracuse Grows, a coalition of gardeners; professionals from Cornell Cooperative Extension, Syracuse University and the SUNY College of Environmental Science and Forestry; community gardens and supporters to promote food production in the City of Syracuse.

Wilson is a key member of the Alliance of Communities Transforming Syracuse (ACTS) Task Force, and led an initiative to bring attention to the problem of the lack of a full-service grocery store on the South Side of Syracuse. “Mable has become a one-person support center,” says the Rev. Earl Arnold, who nominated her for the award. “If you want to connect with anyone who works in the grocery, food advocacy or nutrition communities, ask Mable. Her straightforward, calm but consistent advocacy technique has made her friends throughout the food system.”

Wilson is currently working on a partnership between local organizations to sponsor a symposium this year to educate more people on the possibilities of urban gardening.

Outside of being a mother and working full-time as an admissions advisor at the SUNY College of Environmental Science and Forestry, Karaline Rothwell dedicates countless hours to making Syracuse’s Near West Side, where she lives, a better place.

Rothwell is co-chair of the Westside Residents Coalition, and has worked to bring understanding, action and advocacy to the issues that negatively affect the neighborhood. “Most people would give up in the face of what seems to be an unbeatable battle against poverty, class and race, but Karaline doesn’t waiver, even when many people in the neighborhood assume she is an outsider,” says Isaac Rothwell, her husband, who nominated her for the award.

This year, Rothwell played a key role in bringing awareness to a neighborhood issue of syringe litter, a byproduct of the heroin epidemic. Bothered by the system’s inaction in dealing with the issue, Rothwell organized a group of neighbors to go block to block, distributing information about the need to avoid discarded syringes and to contact authorities for proper disposal. She also organized a litter cleanup campaign and worked with city officials on the proper protocol for response to calls from the neighborhood for syringe cleanup.

She also oversaw the effort to harness funding and manpower to install new landscaping at a veterans memorial in Skiddy Park.

“The spirit I saw in MLK is what I have always seen in Karaline,” says her husband. “She seeks justice and knows the truth, determination and non-violent effort/confrontation will always prevail if you never give up and your cause is truly just.”