Chancellor to Meet with Workgroup on Sexual Violence Prevention, Education and Advocacy Next Week

Recognizes Legacy of Advocacy Center and Its Former Staff

Early next week, Chancellor Kent Syverud will meet with members of the Workgroup on Sexual Violence Prevention, Education and Advocacy to discuss its final report released last month. 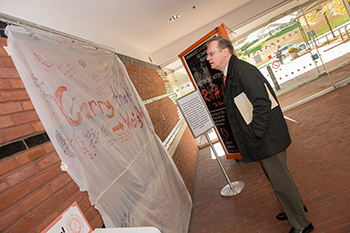 Chancellor Syverud reads the messages on a mattress cover presented by students last semester as part of Carry That Weight, a national day to support survivors of sexual and domestic violence on college campuses.

The workgroup—a group of students, faculty and staff appointed by the Chancellor in September—was charged with identifying any critical gaps in service and support as a result of the realignment of sexual assault services. They were also asked to propose a set of recommendations for improving campus culture as it relates to sexual and relationship violence.

During the semester break, on Dec. 17, the Chancellor received the workgroup’s final report, which was made public and shared with the campus community that day.

“In December I read and reviewed the workgroup’s full report and believe it is an excellent summary that helps identify and shape the opportunities we have to further improve sexual violence prevention, education and advocacy services at the University,” says Chancellor Syverud. “I thank them again for their hard work, and very much embrace the spirit of each short- and long-term recommendation in the report. I look forward to getting to work right away with the workgroup members to begin planning, instituting and implementing their ideas.”

The Chancellor indicated that University and Division of Students Affairs staff have already started to institute a series of the workgroup’s recommendations. The first recommendation in the report was for the University and Chancellor to publicly recognize the legacy of the Advocacy Center and the tireless work of its former staff.

“With the same spirit of earnestness and goodwill that the members of the workgroup have displayed, I want to take action today on the first item on the list as we start a new semester,” Chancellor Syverud says. “I want to strongly convey that I have tremendous respect and admiration for the students, faculty and staff who worked to build and sustain our Advocacy Center for so many years.

“I want to acknowledge the work of the center’s former director, Janet Epstein, who continues to support our students in the University’s Office of Student Assistance,” Chancellor Syverud adds. “When the center was founded in 1990 as the R.A.P.E Center, it was one of the first of its kind in the nation on a college campus, and since that time has supported and educated thousands of survivors and campus community members.”

In addition, staff within the Division of Student Affairs—in partnership with other departments on campus and with full support of Chancellor Syverud—are already instituting and/or assessing a range of the workgroup’s recommendations. These include the following:

“Like all universities, we have much work to do in addressing the serious problem of campus sexual assault and relationship violence. I know we have the talent and the people to make Syracuse University a leader on these important issues,” says Chancellor Syverud. “I commit to working closely with the workgroup and the entire campus community in the coming semester and I look forward to providing regular updates on our progress.”

Members of the Chancellor’s Workgroup on Sexual Violence Prevention, Education and Advocacy who contributed to the report are: