More than three decades ago, Random House published “The Rise of the Computer State,” David Burnham’s prescient book that predicted how computers would soon dominate politics, economics, law enforcement and the basic thinking of the American people. Long before the revelations of Edward Snowden, the book included a chapter on the National Security Agency that Burnham described as “the ultimate computer bureaucracy.” 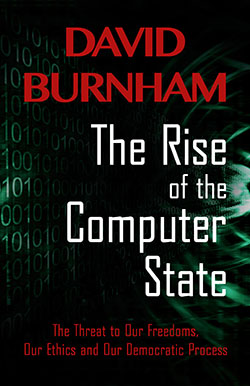 The cover of David Burnham’s book, “The Rise of the Computer State”

This groundbreaking book, and two others by Burnham, have now been released in digital versions, and are available through Amazon and Barnes & Noble, as well in Apple’s ibookstore, on Google Play and on Kobo Books. Print-on-demand versions will be available starting April 7.

Burnham is the co-founder and co-director of the Transactional Records Access Clearinghouse (TRAC), a research professor at the Newhouse School and a former investigative reporter with The New York Times who served on President Lyndon Johnson’s Crime Commission.

All three books received excellent reviews when first published. The Washington Post said that in “The Rise of the Computer State,” Burnham had applied his reportorial skills “to produce a perceptive examination of the machine that is more than any other changing the nature of the world in which we live, moving us with breathtaking speed in unpredictable and not always beneficial directions.”

The book was written as a warning about the dangers of computers to privacy and freedom, as well as a call for enhanced oversight. Because this call has been largely ignored, the book still serves as a rallying cry as well as a sad history.

Burnham’s two other books now available digitally are his detailed 1991 expose of the Internal Revenue Service, “A Law Unto Itself: Power, Politics and the IRS,” and his 1996 book, “Above the Law,” which explores the “secret deals, political fixes and other misadventures” of the Justice Department.

For the IRS book, Burnham used data furnished to him by Susan Long, who had collected voluminous records on the IRS as part of her research and as a result of a lengthy Freedom of Information struggle with the agency. It was the beginning of the relationship that would lead Long, a professor of managerial statistics at the Whitman School, and Burnham to co-found TRAC more than 25 years ago.