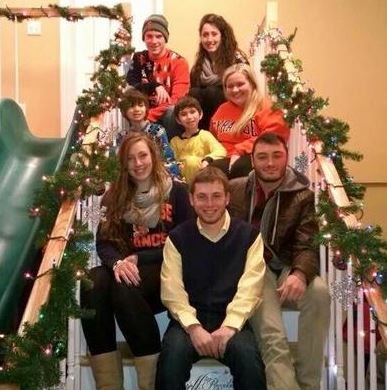 A group of Syracuse University students recently played the role of Santa for the family of a young boy with cancer. Shannon Mowles ’15 and some of her classmates helped to brighten the holiday season for 6-year old Julian Ross of Mansfield, Mass. The story below ran on the website Wicked Local Mansfield, and is being republished here, along with photos, with permission from reporter Rebecca Hyman.

Nine-year-old Julian Ross didn’t ask for a bunch of presents under the tree this Christmas.

Instead he made a simpler wish. He asked his mother Kristi if they could decorate their house for the holidays.

It would be Julian’s first Christmas home since he was diagnosed with stage IV neuroblastoma when he was 6, and he wanted to recapture the magical holiday spirit from the time before he got sick, when his mom would go “crazy” with decorations and everyone would snuggle up together in front of the tree, Kristi said.

“He really missed it,” Kristi said.

But in recent years, Julian’s parents had been too involved in his care to decorate. And with medical bills to pay, their budget has been tight. 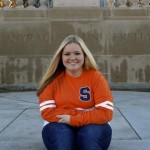 That’s where Shannon Mowles, a 2011 Mansfield High School graduate and senior at Syracuse University in New York, and five of her classmates – also known as “Julian’s elves” – came in.

When they heard about Julian’s wish, they loaded up two SUVs full of wreaths, ornaments, lights, “snow,” a stand-up Santa and no fewer than three trees and headed over to the Ross home in Oswego, NY.

Meanwhile, Julian’s father, Steven, conveniently arranged for a play date for Julian and his little brother Brayden, 5, so as not to ruin the surprise.

That’s when the “elves” got busy, spending three to four hours transforming Julian’s house, decking the halls with garlands and lights and placing a tree in each of the boys’ bedrooms as well as a main one for the whole family.

The boys returned to a winter wonderland.

“He was so excited when he walked in. He looked like he was in awe,” said Shannon, 21.

Julian and Brayden’s favorite part was an electric Polar Express model train the elves set up to circle the main tree. When the boys saw it, their eyes lit up, Shannon said.

“At the end he came up and hugged all of us and said ‘thank you so much,’” Shannon said.

The whole thing started when Shannon’s mother, Denise Mowles of Mansfield, saw a Facebook post from Kristi asking for tips for decorations on sale to make Julian’s wish come true. It so happens Denise belongs to a Facebook group of Syracuse mothers from across the country known as the “Sock Sistas”—for the Syracuse orange socks they sport during college basketball games—and she spread the word.

The Sock Sistas “adopted” Julian a couple of years ago as their little “Mista,” Denise said, sending him care packages and an iPad so he could stay entertained while undergoing chemotherapy. Now Denise enlisted her daughter to assist in their holiday mission, dubbed “Operation Light It Up” to decorate for Julian, and Shannon jumped at the chance.

“It certainly kicked off the Christmas season in a good way. All of my friends just fell in love with Julian. If his mom and dad ever want a date night out, they’ll have six elves to babysit,” Shannon said.

Kristi Thompson-Ross said Julian was diagnosed with stage IV neuroblastoma on Aug. 4, 2011, and wasn’t expected to live until that Christmas.

Instead, Julian has twice beaten the odds, responding remarkably well to experimental treatments and twice emerging with no evidence of disease.

He is currently fighting a second relapse, but the cancer is small and another experimental treatment is on the horizon, this time a T-cell transplant, his mom said.

Currently, there is no cure for stage IV neuroblastoma, so the goal is to keep Julian going strong as treatments advance, Kristi said.

Kristi and her husband, Steven, have always been honest with Julian, feeling that children deserve respect and don’t like to be lied to anymore than adults. But the Rosses are unfailingly positive, as well, never becoming sad or discouraged in Julian’s presence, Kristi said.

That’s not hard, Kristi said. Julian’s a joy to be around—a soft-spoken, serene little boy with a kind heart and radiant smile. He’s not afraid to die—though he’s hoping it won’t be anytime soon and loves his life, his mom said.

When he received toys last year, he asked if he could share them with local families who couldn’t afford gifts on Christmas, his mother said.

“Everyone who meets him says he’s an old soul,” Steven said.

“Before this happened, I was more focused on money and material things. Now, I wake up and find joy in seeing the smile on my son’s face,” Steven said.

Shannon’s friend and fellow elf Emily Gramlich, also a senior at Syracuse, said, “Christmas is a time for giving and I wanted to be a part of making Julian’s first Christmas home, after three years of being away for treatments, one that he’ll remember. Seeing Julian’s reaction to his house decorated is something I’ll never forget.”

“I admire the strength of Julian and his family and the gratitude from the family was overwhelming, which made me feel even more thankful that I was able to be apart of this wonderful event,” Emily said.

Kristi said she’ll always be grateful to the Syracuse moms and the “elves” for helping make their home merry this Christmas.

Their generous gesture was about more than just lights and trees. It captured the true meaning of Christmas for her, she said.

“We’re fighting this but we’re not walking alone. You can overcome anything and make a magical Christmas. It doesn’t matter how much you have,” Kristi said.