Two graduate students in the multimedia photography and design department at the Newhouse School were awarded scholarships for their work during The Fall Workshop at Newhouse. 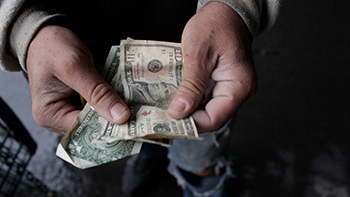 A still from Jake Herrle’s entry, “The King of Scrap.”

Jake Herrle and Alec Erlebacher were recognized for their work during the annual program, which took place Oct. 16-19, according to the Newhouse School, Momenta Workshops and the National Press Photographers Association (NPPA). The two winners were selected through popular vote by a diverse group of workshop instructors who hailed from across the country.

Each year, over one weekend, about 90 graduate and undergraduate students record, film, photograph and tell stories under the guidance of professional coaches and faculty. This year’s theme was Family and the Living Wage.

Herrle won a full scholarship to a workshop with Momenta Workshops for his piece, “The King of Scrap.” The piece was selected as the Best Overall Project from a field of more than 40 entries.

Momenta has sponsored this award for four years.

Erlebacher won a full scholarship to attend the Northern Short Course in Photojournalism hosted by the NPPA in March 2015. Erlebacher’s piece, “A Big Bite,” received the award for the Best Story Concept.