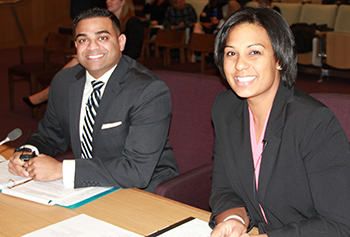 This was the first Grossman Trial Competition held in the new Dineen building. It was held in the Melanie Gray Ceremonial Courtroom.

The competition involves both second- and third-year students and is designed to test their skills in evidence, courtroom etiquette and knowledge of trial practice.

This year’s trial problem set focused on a criminal case, which was also a first for the competition. The case revolved around an alleged murder,with the defendant using an affirmative defense of self-defense. The teams participated in a full trial.

The competition is named for Lionel O. Grossman L’16, whose professional achievements, community service and commitment to excellence personified the ideals of the legal profession. For more than 30 years, Grossman devoted himself to the fight against cerebral palsy. In 1946, he founded the Cerebral Palsy Center and became the president of the United Cerebral Palsy Association of Syracuse and New York State. He also served as co-counsel to the National Cerebral Palsy Legislative Committee.

Iozzo, Lanciault and Sebastian were also all finalists for the Frank H. Armani Advocacy Award, which acknowledges the duty all lawyers have to provide zealous and ethical legal representation to their clients.

Armani stands as a role model for legal ethics. He has received numerous awards, including a Distinguished Lawyer award from the Onondaga County Bar Association in 2006 and was nominated for the Michael Franck Award presented by the American Bar Association Center for Professional Responsibility.