Representatives from the Institute for National Security and Counterterrorism (INSCT) traveled to the Arab Gulf recently to co-host a preparatory workshop toward a future international conference on “Islam and the Laws of War,” to be held in Riyadh, Saudi Arabia, in 2015. 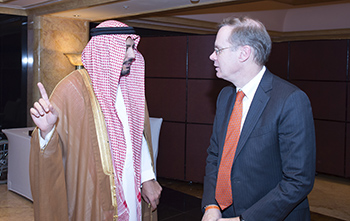 “The Role of Shari’a and Islamic Laws of War in Contemporary Conflict” workshop took place at the King Faisal Center for Research and Islamic Studies (KFCRIS) in Riyadh (http://www.kff.com/en/King-Faisal-Center-for-Research-Islamic-Studies) on Dec. 14 and 15. The workshop was hosted by Prince Turki bin Faisal Al Saud, chairman of KFCRIS. Co-hosts of the event, along with INSCT, were two partners in INSCT’s ongoing Islam, Law and War (http://islamlawandwar.insct.org) research project: the US Institute of Peace (USIP) and Italy’s International Institute of Higher Studies in Criminal Sciences (ISISC).

In the face of ongoing conflicts throughout the diverse Muslim world and high-profile misappropriations of Islam by extremist groups, this interdisciplinary, intercultural workshop discussed Shari’a traditions and approaches to conflict settings and international conflict norms. Workshop presenters and participants also explored how Shari’a norms intersect with international humanitarian law and the challenges posed by postconflict transition and justice in the Arab and Muslim worlds and beyond.

Scholarship that framed the workshop includes INSCT’s ongoing work on these topics (http://insct.syr.edu/projects/security-in-the-middle-east-islam/ ); “Justice in Postconflict Settings: Islamic Law and Muslim Communities as Stakeholders in Successful Transition” (a white paper by INSCT, ISISC, and USIP); and “The Sharia and Islamic Criminal Justice in Time of War and Peace” (Cambridge UP, 2014), a new book by Professor Cherif Bassiouni, ISISC president.

Opening remarks were delivered by Syracuse University Chancellor Kent Syverud. Professor William C. Banks, director, and Corri Zoli, director of research, represented INSCT. As a result of progress made during the workshop, an international conference on “Islam and the Laws of War” is being planned for 2015 in Riyadh, based in part on a commitment of support from both Prince Turki and the Organization of Islamic Cooperation.