‘Holidays at Hendricks’ to Be Broadcast on WCNY Television and Radio 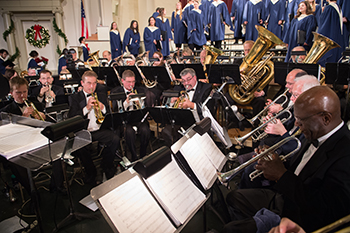 Members of the Syracuse University Brass Ensemble perform during this year’s concert.

Production of the program was done by Syracuse University’s Video Production unit in the Marketing and Communications division. The production team was comprised of Mary Kasprzyk ’03; Roxane Niezabytowski; Sean Horsford ’10; Neal Coffey G’89, manager of operations and engineering at the Dick Clark Studios; Andrew Wowelko ’12, instructional technology consultant with Information Technology and Services; and Frank Hegyi ’10. Audio recording was provided by Jeremy Johnston of Subcat Studios.

In keeping with Hendricks Chapel’s inclusive interfaith vision, a variety of sacred and secular pieces was performed by the groups both individually and in combination. “Holidays at Hendricks” included traditional favorites, such as “Jingle Bells” and “Have Yourself a Merry Little Christmas” alongside holiday-oriented pieces from the classical repertoire, including “Glory Hallelujah to the Newborn King” and “O magnum mysterium.”

The concert closed with combined performance of “Hallelujah” from Handel’s “Messiah: A Soulful Celebration” and with the traditional candle lighting and singing of “Silent Night.”