Fans and followers of author George Saunders, a professor in the creative writing program in the College of Arts and Sciences, will have the opportunity to learn more about the man who has been called America’s greatest living short story writer. “The Book of Saunders,” an up close and personal look at the short story master, will air Friday, Dec. 26, at 10:30 p.m. and again on Sunday, Dec. 28, at noon on Public Broadcasting Service’s WNET. It will also air on WLIW on Dec. 28 at 3 p.m. 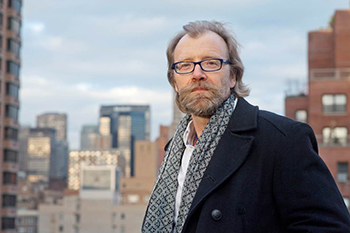 Viewers in New York, New Jersey, Long Island and parts of Connecticut and Pennsylvania will be able to tune in.

In the half-hour documentary, Saunders reflects on life, levity, the pursuit of his craft and love of teaching. He’s the author of the New York Times bestseller “Tenth of December,” which was awarded the Story Prize and England’s Folio Prize. His other books include the critically acclaimed collections “Pastoralia” and “CivilWarLand in Bad Decline,” a bestselling children’s book, and an essay collection, “The Braindead Megaphone.”

In 2006, he was awarded the Pen/Malamud Award for Excellence in the Short Story and was included in Time’s 2013 list of the 100 most influential people in the world. A recipient of the MacArthur “Genius” Award, he teaches in Syracuse University’s Creative Writing Program.

His convocation speech to College of Arts and Sciences graduates in 2013 urging kindness and tolerance to others was published in the New York Times and went viral, garnering over a million views. It was turned into a book, “Congratulations, By the Way: Some Thoughts on Kindness.”