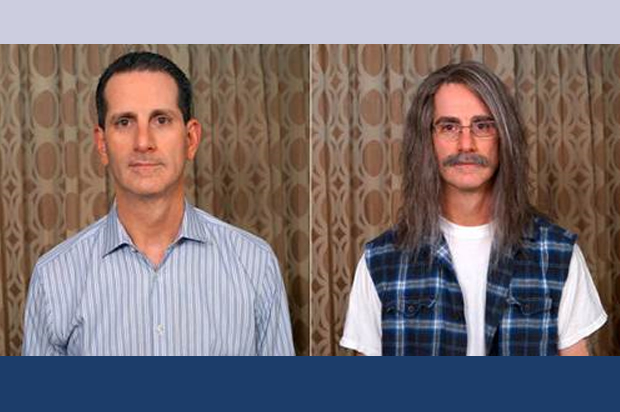 John Hartman’s before and after photos in ‘Undercover Boss’. (Courtesy CBS)

For John Hartmann L’88, it was admittedly a nightmare scenario. “I don’t like talking about myself,” he said, “and I don’t like having my picture taken.”

But the chance to further enhance the brand of the company he runs, True Value, was reason enough for Hartmann to agree to “go undercover,” and to do it beneath the hot lights of a network TV show. Hartmann is set to appear on the season premiere episode of “Undercover Boss” (CBS). The program places top business executives into entry level positions, incognito of course, and allows them to see how their business operates in the trenches. Hartmann currently serves as the CEO of True Value, and has served in similar top-level executive positions at other home improvement chains, including Home Depot and Mitre 10, which is based in New Zealand. Before his career in the business world, Hartmann served as an FBI agent for a decade. A Crain’s Chicago Business article also reports that Hartmann is an avid ocean fisherman and motorcross biker.

For his undercover boss role, he donned a long-haired wig.

“We had a long discussion to determine if this was good for True Value, and in the end we felt it was a great opportunity for me to see the day-to-day functions of our stores,” says Hartmann. “As CEO and steward of our brand, a big consideration is that True Value is displayed correctly. I’m confident the show will do that. Real life is captured by these reality shows, and you’ll see in the commercials there are some funny, perhaps uncomfortable, aspects captured on the show. It is a bit of a roll of the dice since we’re not in full control. This is full-fledged reality TV and you never know what’s going to happen.”

Hartmann also speaks of another “roll of the dice.”

“Syracuse rolled the dice on me,” he says. “I had three great years there, passed the bar exam on the first try and was recruited by the FBI while I was a law student. Every great thing in my career started at Syracuse. I bleed orange, and I was so proud to come back for the grand opening of Dineen Hall.” The names of both John and Martina Hartmann appear on the donor wall at Dineen, and John was also a member of the Board of Advisors. “I can’t say enough of how important and formative my years at Syracuse were, not only for the FBI, but my business career too.” He jokes his kids are probably sick of hearing their dad talk about the importance of a strong foundation of education.

Undercover Boss airs Sunday, Dec. 14, from 8-9 p.m. on CBS (WTVH-5 in Syracuse). “I encourage people to watch,” says Hartmann. “It will be both heartwarming and entertaining.”