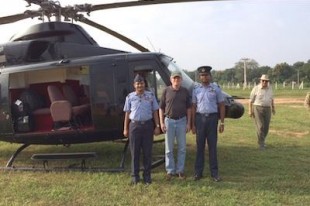 David M. Crane, professor of practice in the College of Law and faculty member in the Institute for National Security and Counterterrorism, has arrived in Sri Lanka as part of his work to uncover possible war crimes.

Crane was appointed by President Mahinda Rajapaksa of Sri Lanka in August 2014 to the Advisory Council to the Presidential Commission on Missing Persons (http://documents.gov.lk/Extgzt/2014/PDF/July/1871_18/1871_18%20%28E%29.pdf), which is investigating war crimes allegations related to the end of the 30-year civil war with the Tamil Tigers (officially know as the Liberation Tigers of Tamil Eelam).

Among its tasks, the commission will investigate and report on whether any person, group, or institution bears responsibility for losses of civilian life during the civil war in violation of international humanitarian law (IHL) or international human rights law; the adherence to or neglect of principles of distinction, military necessity and proportionality by Sri Lankan armed forces; whether the Tamil Tigers, as a non-state actor, are subject to IHL; and the rebels’ alleged use of human shields, child soldiers and illegal financial resources.

From 2002-2005, Crane was the founding chief prosecutor of the Special Court for Sierra Leone, an international war crimes tribunal, appointed to that position by the secretary general of the United Nations, Kofi Annan.