Chancellor Kent Syverud today announced the appointment of Matt Ter Molen to the position of Chief Advancement Officer and Senior Vice President following a comprehensive national search. The appointment was confirmed by vote of the Board of Trustees’ Executive Committee earlier today.

Ter Molen, who will report to Chancellor Syverud, will assume his new role at the University on Feb. 1, 2015. 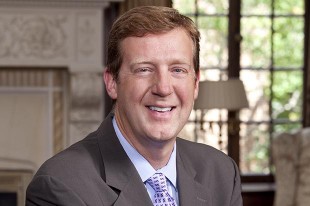 “We are very fortunate to have found in Matt a talented and accomplished fundraising strategist and gift steward,” says Chancellor Syverud. “He brings a wealth of experience, having led large and successful higher education fundraising campaigns. As we seek to continue the University’s strong fundraising momentum, I’m confident Matt is the right person to lead us in securing the resources necessary to enhance our academic mission, support our students and faculty, and take our University to the next level.”

“Matt impressed the entire search committee with his demonstrated experience managing large, complex advancement organizations and his superior ability to motivate teams and inspire giving,” says Thomas Walsh, former Executive Vice President of Advancement and External Affairs, now Special Counsel to the Chancellor. “I believe he has the keen ability to continue cultivating our principal donors and will lead our advancement operation with great success.”

In his new role, Ter Molen will provide counsel to the Chancellor to determine long-term expectations for a best-in-class advancement organization, including planning, timeline, allocation of resources, capacity projections and infrastructure needs. He will cultivate, secure and steward complex principal gifts, in partnership with the Chancellor and gift officers, while creating an environment of continuous improvement for the advancement organization. Ter Molen will foster collaborative relationships with deans and representatives from schools and colleges and administrative units, working closely to support their fundraising needs and cultivate big ideas that will attract funding.

“I am thrilled and honored to be joining the Syracuse University community and look forward to working with Chancellor Syverud, the Board of Trustees and members of his senior team and other academic leaders in this new role,” Ter Molen says. “Syracuse University, its alumni and donors around the world are known for their Orange pride and spirit. I look forward to becoming a part of the Syracuse community.”

Ter Molen grew up in Evanston, and graduated from Miami University in Ohio. After almost three years in the Peace Corps in Honduras, his first fundraising position was at the University of Chicago, where he started as an assistant director in annual giving in 1990. From 1990 to 1998, he held successive positions at the University of Chicago, spending four years as the director for annual giving during its $500 million “Campaign for the Next Century,” as well as time as a regional major gift officer.

In 1998, Ter Molen was hired as the assistant dean for development for the Weinberg College of Arts and Sciences at Northwestern, and led the arts and sciences portion of Northwestern’s previous comprehensive campaign, “Campaign Northwestern,” directing the fundraising of $190 million for key college priorities over a five-year period. In 2003, he became the Associate Vice President for Alumni Relations and Development at Northwestern, and in this position he has managed a variety of giving teams including the Evanston-based schools and units, annual giving, major gifts, planned giving, corporate relations and foundation relations. In addition to his role in planning and executing “We Will. The Campaign for Northwestern,” he also oversaw the two-year “Athletics Initiative” campaign that raised funds for endowment and facilities and helped launch the fundraising efforts for the Kellogg School of Management’s new building in Evanston.

Ter Molen has been a member of the Council for the Advancement and Support of Education (CASE) and currently serves on the CASE V Board of Directors. Additionally, he has been a presenter at CASE, the Association of Fundraising Professionals and other fundraising organizations. In Evanston he is active with a number of local nonprofit and community organizations.

Ter Molen will relocate to Syracuse with his wife, Jenna, and their three children.