Johanna Keller, director of the Goldring Arts Journalism program at the Newhouse School, is one of 30 professionals recognized by Musical America as individuals who are making a difference in the music industry through risk-taking or innovation. The list was published in the December 2014 special report “MA 30: Professionals of the Year/Profiles in Courage.” 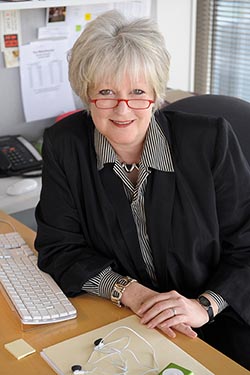 Musical America calls Keller “a dynamic presence in the industry for 30 years” and notes her refusal to accept that arts journalism is in decline, as some fear. “Her approach, flying in the face of conventional wisdom, is to train young writers to be the best possible arts journalists,” the profile says.

“It was such an honor to find myself in the company of so many industry professionals I’ve worked with and artists I’ve written about over the years,” Keller says. “I was especially gratified because Musical America has been the Bible of the performing arts, and it was how I really got to know the field in the late 1970s when I first arrived in New York City.”

Keller is the founding director of the Goldring program, which will celebrate 10 years at Syracuse University in 2015. It was the first master’s program in arts journalism in the country.

A nationally recognized arts journalism advocate, Keller writes about music and culture for The New York Times, the Chronicle of Higher Education Review, London Evening Standard, Los Angeles Times, Opera News, Symphony, Musical America, Strad and other magazines in the U.S. and the U.K. For her essays in The New York Times, she received the 2000 ASCAP-Deems Taylor Award and the 2001 Front Page Award from the Newswomen’s Club of New York.

She was editor of Chamber Music magazine from 1997-2001. In 2007, she received the Excellence in Graduate Education Faculty Recognition Award from Syracuse University.