Novelist Ruth Ozeki will conclude Syracuse University’s Fall 2014 Raymond Carver Reading Series with a reading Wednesday, Dec. 3, in Gifford Auditorium. A question-and-answer session is from 3:45-4:30 p.m., followed by the reading. 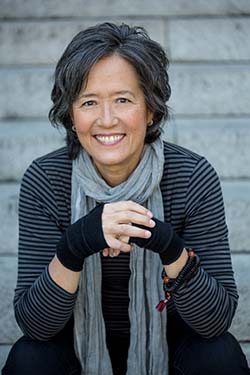 Ozeki’s most recent work, “A Tale for the Time Being” (Viking/Canongate, 2013), was short-listed for the Man Booker Prize, was a finalist for the National Book Critics Circle Award for fiction and won the Los Angeles Times Book Prize in Fiction.

The New York Times praised the novel as a complex, autobiographical parable. “This is a book that does not give up its multiple meanings easily,” the Times wrote. It “gently but insistently (instructs) the reader to progress slowly in order to contemplate the porous membrane that separates fact from fiction, self from circumstance, past from present.”

The story involves an introspective novelist named Ruth who finds a Japanese girl’s diary washed up on the coast of British Columbia. Ruth and her husband, Oliver, live on a Canadian  island, far from their former home in New York City. Ruth tries to find the diary’s author, Nao (pronounced “now,” suggesting a double meaning), embarking on a search that raises questions about identity, reality and connections. As if responding to the novel’s title, Ruth says, “Life is fleeting! Don’t waste a single moment of your precious life! … Wake up now! … And now! … And now! ”

In an interview with abebooks.com, Ozeki discussed the relationship between reader and writer, a theme of “A Tale for the Time Being.” “ … I just see them as a continuum, I don’t see them as being separate,” she said. “Writing is a response to reading—it’s sort of a conversation, and you can’t have a conversation by yourself. It’s a conversation that unfolds over time.”

Ozeki is the David Edelstein and Jennie Berkson Distinguished Author.

The Raymond Carver Reading Series is named for the great short story writer and poet who taught at SU in the 1980s and died in 1988, and is presented by the creative writing program in the College of Arts and Sciences. The series, presented as part of the popular undergraduate course “Living Writers,” each year brings 12 to 14 prominent writers to campus to read their works and interact with students.