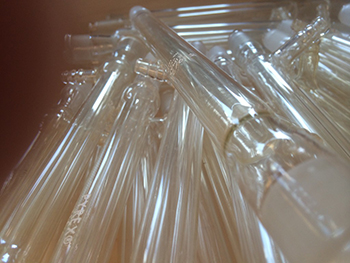 Glass condenser columns are among the items Gary Bonomo believes could have a new use under his equipment swap program.

Gary Bonomo reaches for his keychain, and unlocks a drawer in a sunsplashed room at the Life Sciences Complex. Inside is a treasure trove of glass tubes. Bonomo explains that the tubes are actually condenser columns for distillation, a common laboratory item. There are three drawers filled with the tubes, which are no longer used by the courses in the room and just sit in storage. Bonomo believes those old tubes can have a new life, along with other pieces of lab equipment that are in storage or classroom drawers.

“We realize that courses change over time, research topics change, and in the process, one lab ends up with a piece of equipment they no longer need or use,” says Bonomo, a lab supervisor and the general chemistry laboratory instructor. “If it’s just sitting there, it’s a waste of a piece of equipment, and also a waste of space in the lab.”

It was the beginning of an idea to catalog unused lab equipment, from test tubes to sand baths used to evenly heat solutions. “The objective is to generate a list of the equipment not being used, and see if there’s a place in our department where it can be used,” says Bonomo. “If not, we could find a place where it can be used elsewhere, such as shipping it off to Excess Property Store where it can be sold to generate money for the department and the university. We’ve done inventory systems before with larger equipment. We also have professors and instructors who are open to the sharing of equipment. This helps formalize and build on that.”

According to Bonomo, “I saw an opportunity to organize the process and help the department. It’s a department I take great pride in,” he added. 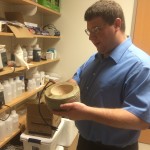 And when it comes to cost savings, it all adds up. In the case of the glass distillation condenser columns, a quick check online indicates a price of about 75 dollars each. Bonomo says it’s not only glassware, but higher-end equipment that once had a useful life but is no longer needed for one particular class.

“We just call it better utilization of equipment,” according to Bonomo, who brought the idea up at a recent chemistry department SWOT (strengths, weaknesses, opportunities, threats) analysis meeting as part of the Fast Forward initiative. “My Department Chair (James Kallmerten) thought it was an excellent idea, and gave me approval to start at the end of this semester,” says Bonomo. The rationale, Bonomo explains, “is that at the end of the semester you’re making decisions about future semesters with regards to course work and what research labs are doing. The idea of doing it each semester is that you have a fresh list each semester to make sure the list is always up to date.”

“It’s great that we have people like Gary who identified an idea and took the initiative to follow through,” says Andy Clark, senior associate vice president for operational excellence in the Program Management Office. “Not only will the sharing of chemistry equipment save the University money, but it will foster of spirit of collaboration and information sharing. I’m really happy that Gary is embracing the Fast Forward Syracuse initiative and I hope many others are encouraged to follow his example.”

An example set one column tube at a time.