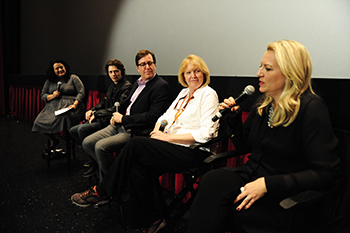 Cheryl Strayed, right, answers a question during a Q&A after a screening of “Wild” in Los Angeles on Nov. 20. From left are moderator Jenelle Riley, Nick Eversman, David Rubin and Nancy Haecker.

A special screening of “Wild,” a movie starring Academy Award-winner Reese Witherspoon, based on the New York Times bestseller by Cheryl Strayed G’02, was held Nov. 20 at TCL Chinese 6 Theater in Los Angeles. More than 200 people attended the event, including Syracuse University alumni, students in the SU in LA semester, parents of current L.A. students, faculty and friends of the University. Following the screening was a Q&A session, moderated by Jenelle Riley, deputy awards and features editor at Variety. Panelists were:

“We are excited to be able to offer our students and alumni these wonderful opportunities to meet and learn from such accomplished professionals,” says Joan Adler, assistant vice president of Regional Programs/Los Angeles. “After the screening, the moderator and panelists stayed to talk with members of the audience. Cheryl Strayed stayed even longer, posing for photos, signing books and chatting with our students, alumni and guests.”

Those attending also had a chance to meet and mingle at a pre-screening reception, and viewed a short video about Syracuse University’s Creative Writing Program by John Craddock, director of Mediaworks in the College of Visual and Performing Arts.