Make-A-Wish Central New York will be the beneficiary of this year’s 10th Annual Charity Sports Auction, to be held Dec. 6 during the men’s basketball game against St. John’s at the Carrier Dome. Previous auctions have brought in as much as $35,000 for local charities.

Where exactly does the money go? 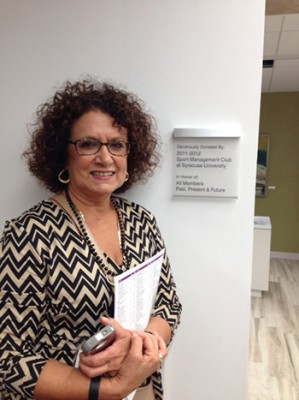 Toni Gary, director of community relations and development for the Upstate Foundation, shows off the plaque for a patient nourishment station paid for by money raised through the 2012-2013 Charity Sports Auction.

It stays right here in Central New York, helping the local community. For example, the $30,500 raised at last year’s auction went to the Food Bank of Central New York, buying 79,300 meals for those in need. The year before, the beneficiary was Special Olympics New York, which used the $35,239 raised to pay for 88 athletes to participate for free.

One organization that has benefited twice from the Annual Charity Sports Auction is the Upstate Foundation for Upstate’s University Hospital, first in 2009-2010 and again in 2012-2013.

The first time was when Upstate was building the Golisano Children’s Hospital. “We were really fortunate to be able to connect with the students,” says Toni Gary, director of community relations and development for the Upstate Foundation. “One of the best parts was interacting with the students.”

That auction brought in $20,000, which allowed the Sport Management Club to name a respiratory therapy equipment and work room in the Upstate Golisano Children’s Hospital. A bonus was that some of the sport management students came in and volunteered in event sponsorship and event support, areas with which they were familiar from planning and carrying out the auction.

When Upstate was doing fund raising for its new cancer center in 2012, Gary submitted a proposal to the committee choosing the sports auction beneficiary, and her project was chosen. This time, the auction raised $30,444. That money paid for a patient nourishment station, which serves patients who are receiving infusion and their families, along with a two-sided fireplace in the main waiting area for radiation oncology.

Gary is aware of the ways in which the sports auction benefits both the students and the beneficiaries they choose. “The auction is such a unique way for students to get involved with the community and learn about nonprofits,” she says. “And for us, it’s been a great pleasure to have connected with the Sport Management Club and feel the passion the students and their advisors have to make a successful event to help families and children in the surrounding community.”