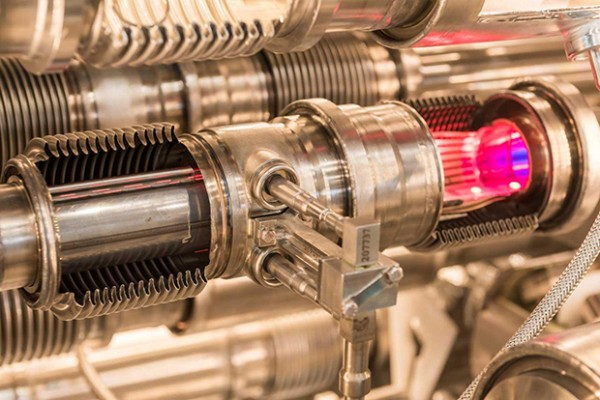 A pink glow illuminates the inside of this model of the LHC beam pipe, which is used to train engineers and technicians at CERN. ( Photo by Guillaume Jeanneret/CERN)

A physicist in the College of Arts and Sciences is the lead contributor to the discovery of two never-before-seen baryonic particles. The finding, which is the subject of a forthcoming article in Physical Review Letters (American Physical Society, 2014), is expected to have a major impact on the study of quark dynamics. 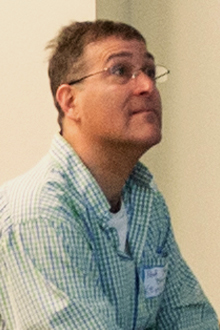 Steven Blusk, associate professor of physics, has identified particles known as Xi_b’- and Xi_b*-. Although the particles had been predicted to exist, nobody had seen them until now. The discovery is part of his ongoing work at the Large Hadron Collider beauty (LHCb) experiment at CERN in Geneva, Switzerland.

“The particles we’ve discovered are quite unique,” says Blusk, a leader in experimental high-energy particle physics. “Each one contains a beauty [b] quark, a strange [s] quark and a down [d] quark.”

A baryon is a subatomic particle made up of three quarks, bound together by strong force. Two other familiar baryons, the proton and neutron, combine with the electron to form all the known elements of the periodic table.

“The building blocks of all known things, including cars, planets, stars and people, are quarks and electrons, which are tied together by strong, electromagnetic forces,” Blusk says.

Unique to each newly discovered particle is its mass, which is approximately six times larger than that of the proton. Blusk attributes its size to the presence of a heavyweight b quark and to the particle’s angular momentum—a property known as “spin.”

In the Xi_b’- state, the spins of the two lighter quarks point in opposite directions; in the Xi_b*- state, they are aligned. The difference is what makes the Xi_b*- a little heavier.

“The Xi_b’- is close in mass to the sum of the masses of its decay products. If it had been just a little lighter, we wouldn’t have seen it at all,” Blusk adds.

Much of Blusk’s work draws on the theory of Quantum Chromodynamics, which describes the interaction of quarks. As a result, he and his colleagues have studied the masses of both particles, along with their relative production rates, widths and decays.

“This is a very exciting result,” Blusk adds. “Thanks to LHCb’s excellent hadron identification, which is unique among LHC experiments, we’ve been able to separate a clean, strong signal from the background. It demonstrates, once again, both the sensitivity and precision of the LHCb detector.”

Blusk is part of a team of Syracuse researchers, led by Distinguished Professor of Physics Sheldon Stone, working at CERN, which is the world’s leading laboratory for particle physics. There, they have been involved with the LHCb experiment, which seeks to identify new forces and particles, in addition to those already known and codified in the Standard Model, a theory describing the physical makeup of the visible Universe.

“Fourteen billion years ago, the Universe began with a bang, and matter and anti-matter were formed,” Stone says. “But just one second after the Big Bang, anti-matter all but disappeared. … The LHCb experiment is designed to find out what really happened after the Big Bang that has allowed matter to survive and build the Universe we inhabit today.”

Research connections to the natural world are a key cornerstone of the BioInspired Institute. The work of BioInspired scientists, especially the work connected to animals, was featured in the Washington Post article “Animals inspire scientists to solve problems that humans…

To commemorate Veterans Day this year, LawnStarter ranked 2023’s Best Cities for Veterans, where they looked at cities with high populations of veterans and determined it by ease of navigation of resources, housing affordability, employment, educational opportunities, and other metrics….