“Elysian Fields,” a two-person show featuring the work of Tammy Mercure and Courtney Asztalos G’17, is now on exhibit at the J&J Smith Gallery, located on the first floor of Smith Hall, through Wednesday, Dec. 10. The show combines photographs from Mercure’s “The Immortals” with photographs from Asztalos’ “Bourbon Street.”

Elysian Fields, a historical street in New Orleans, was named for the soul’s journey back to life in Virgil’s “Aeneid” and was the street that Blanche in the play “A Streetcar Named Desire” imagines herself getting off on one day. All photos in the exhibition were taken in New Orleans.

Gallery hours are Monday through Friday, 9 a.m.-5 p.m.; the gallery will be closed on Thursday, Nov. 27, and Friday, Nov. 28, in observance of Thanksgiving. 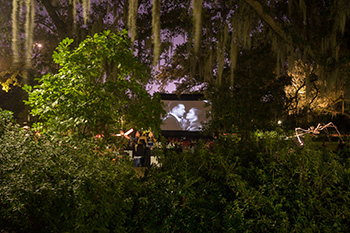 Mercure’s “Immortals” shows how time in New Orleans flows differently. “It is closer to the end of the world as we know it,” says Mercure in her artist’s statement. “People are compelled to be the biggest version of themselves while it lasts. The Immortals are present. While the city is known for Dionysus, with the revelry of Mardi Gras and the drunkenness of Bourbon Street, and Poseidon is known to wreak havoc, there is much more. … The past, present and future shake hands, and it is beautiful to see.”

Mercure was recently named one of the “100 under 100: The New Superstars of Southern Art” by Oxford American magazine. She has been featured on CNN Photos, VICE, Daily Mail and NPR’s “The Picture Show.” She was published in the Guardian UK (Big Picture), Darwin magazine and in the book “Place, Art and Self” by Yi-Fu Tuan. A resident of New Orleans, she earned a bachelor’s degree at Columbia College Chicago and a master of fine arts degree from East Tennessee State University.

Asztalos’ “Bourbon Street” series investigates the famed street by delving deep into the ocean of its own tourism while utilizing the Bourbon Street EarthCam’s surveillance, a strange result and reality of its own famed existence. 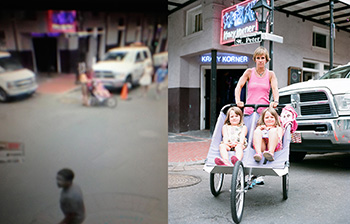 Two works from Courtney Asztalos that are included in the “Elysian Fields” exhibition.

Asztalos is a graduate student pursuing a master of fine arts degree in art photography in the College of Visual and Performing Arts’ (VPA) Department of Transmedia. Her work has been exhibited and is featured in several special collections, including UCLA Arts Library, Duke University, Texas Tech University, Vanderbilt University, University of Central Florida and the University of Miami.

The exhibition is presented by VPA’s Department of Foundation. For more information, contact Juan Juarez at jhjuarez@syr.edu.