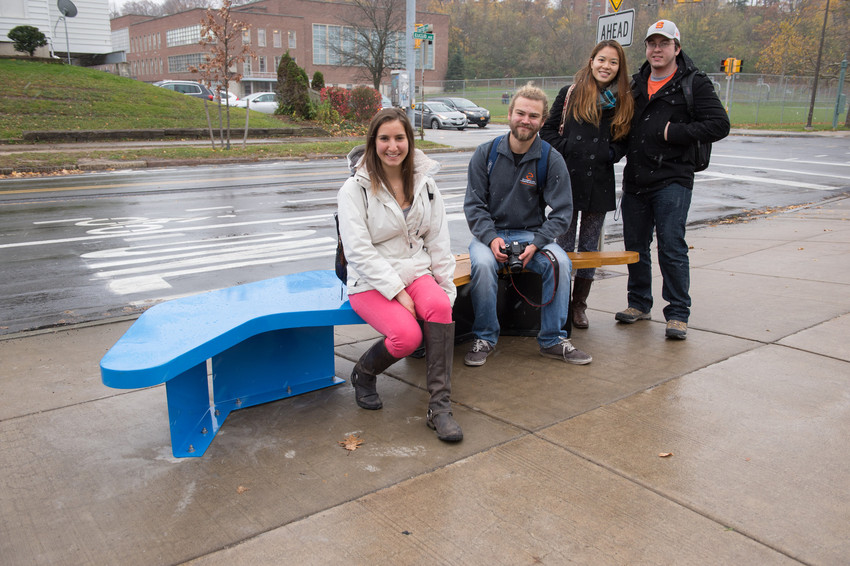 Students with the Community Ambassadors Program check out the new art bench at the corner of Euclid and Comstock avenues, which they established to bring together the campus and neighborhood communities. The students are, from left, Callie Sher ’15, Garrett Braddock ’15, Yan Mei Jiang ’15, and Johnathan Alessi ’15.

On the edge of campus, the Syracuse University campus and the east University neighborhood meet up at Comstock and Euclid avenues. Bikers, drivers and pedestrians move quickly through this bustling gateway intersection every day.

Now they have a reason to linger.

A group of students with the Community Ambassadors Program, through the Office of Off-Campus and Commuter Services, has established a bench, which is both a piece of art and a functional seating area, that enhances the intersection, provides repose for passersby and commuters, and invites conversation. The bench was installed Thursday afternoon, Nov. 13.

“This project ties together the off-campus neighborhoods with the Syracuse University community,” says Johnathan Alessi ’15, a civil engineering student and community ambassador. “It embodies what it means to be a community ambassador: we are building relationships, making new contacts and giving back to the community.”

The community ambassadors live off campus in the nearby University neighborhoods and host two to three events per semester to help bring together the permanent residents, landlords and students to build community and allow people to get to know their neighbors.

The group of community ambassadors, some of whom graduated last May, had started thinking about an idea to create something for the neighborhood last spring.

“A lot of us really wanted to have a project where we could leave a mark into the community that would last forever,” says community ambassador Yan Mei Jiang ’15, a public relations and policy studies major. “Since many of us are not permanent residents, we wanted to give back to the community.”

The project took a new importance after it was chosen as a recipient of one of the Fast Forward grants. The Fast Forward competition was kicked off last spring as part of Chancellor Kent Syverud’s inauguration. Students were asked to submit ideas for projects that would make a positive impact on the world.

“When we saw this competition from Chancellor Syverud, we thought it was a perfect chance to try for it to see how it would go,” Jiang says. “We thought it would be perfect for people to have benches along the University neighborhood, so people can sit down and relax and interact with each other while waiting for the bus or visiting the neighborhood.”

The community ambassadors, including Phil Groden ’14 and others who graduated last year, saw the work of local artist Brendan Rose G’10, who had created some artistic trash receptacles around the city, including one at Comstock and Euclid, and reached out to him to create something for seating. 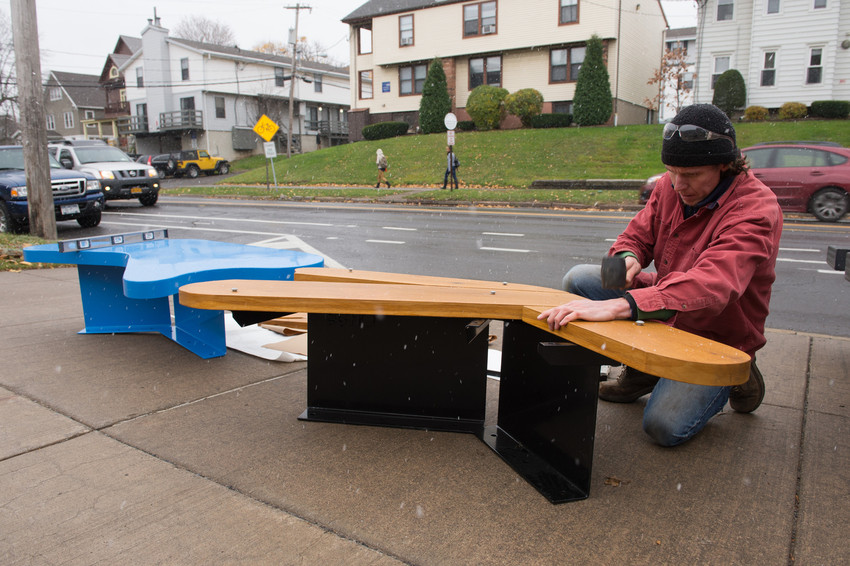 Local artist Brendan Rose G’10 puts the finishing touches on the bench he crafted for the community ambassadors, who provided guidelines to him on what they wanted it to represent. Rose worked with student Ryn Adkins ’15 on the project.

Rose, who earned a master’s degree from the School of Architecture, partnered with student Ryn Adkins ’15, in the College of Visual and Performing Arts, on the project, and worked on the design and fabrication of the bench since this summer.

“We gave them guidelines of what we wanted; he drew it up and we said, ‘That’s perfect,’” Jiang says.

The metal and wood bench, which is two separate-looking pieces, was meant to represent welcoming in many languages.

Rose and Adkins conceptualized ideas about the students’ thoughts on what the piece should represent.

“We were really interested in trying to do that in a way that was abstract and informal and not so literal,” Rose says. “We started playing around with how we could create a bench form that spoke to that notion of being welcoming. We settled on this idea of these two forms that are very different material qualities and reaching out to each other.”

They also wanted the forms to be welcoming for people to sit and face each other. “It’s intentionally non-linear, something that would get people to be more intimate with each other,” Rose says.

Along with the artists, the students also recognized the assistance of their supervisor in the Office of Off-Campus Commuter Services, Assistant Director Kerry Heckman; the Office of Governmental and Community Relations; the City of Syracuse Department of Public Works; and Syracuse University’s Physical Plant staff, who helped install the bench.

The project—from conceptualizing, brainstorming, working with other students and communicating with the various officials—has been a learning experience. “It’s something you can’t learn inside the classroom,” Alessi says.

The idea of benches has sprung up recently around the neighborhood; a landlord has installed some at his buildings and a fraternity put one in front of their house.

“We are so happy that other people are enjoying idea of benches and we want to continue this project,” Jiang says.

Outside of the Fast Forward grant, the students are looking to establish a fund that would continue to raise monies to invest in beautification or other projects in the neighborhood.

“We really hope these ventures will bring together the community and this project is a path to that,” Jiang says. “We want to help create a happier community where we can all feel safe and welcome.”

Alessi expects he’ll be using the bench often, as he lives down the street. “When families are coming in for games, or friends want to meet up at the corner, or if people just want to take a break, this is where they’ll be,” Alessi says. 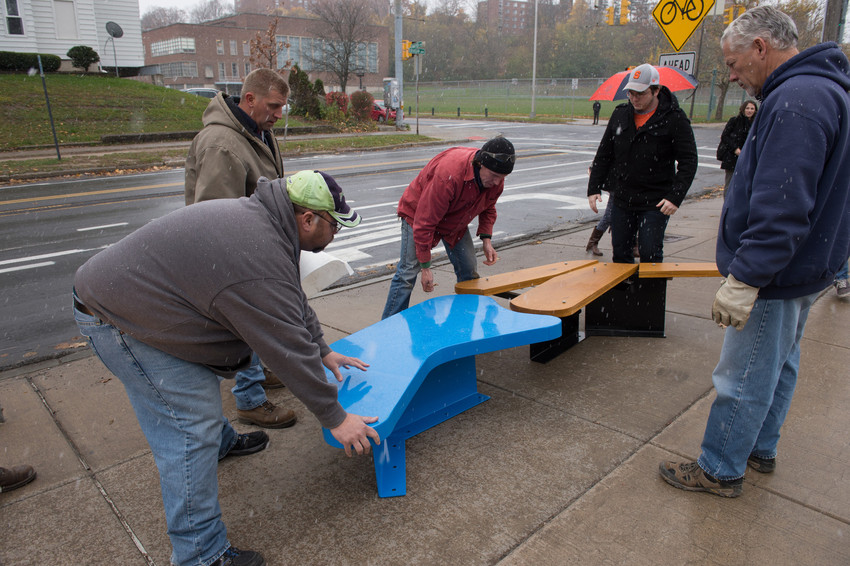 Physical Plant workers help install the art bench with the artist and students Thursday at the corner of Euclid and Comstock avenues.