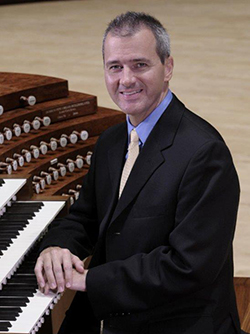 Organist Alan Morrison will be featured in the next Esther Drake and John Vincent Malmgren Concert Series presentation in Hendricks Chapel on Sunday, Nov. 16. The concert will begin at 4 p.m. and is free and open to the public. Free parking is available in the Q1 lot and the Irving Garage.

Musical selections will include works by J.S. Bach, Duruflé, Widor, Vierne and Sowerby.

Morrison will also give a master class on Saturday, Nov. 15, at 1:30 p.m. in Setnor Auditorium in Crouse College, hosted by the Setnor School of Music in the College of Visual and Performing Arts.

Morrison is organ professor at the Curtis Institute of Music in Philadelphia and at Westminster Choir College of Rider University in Princeton, N.J. He is an internationally acclaimed concert artist, having performed at Lincoln Center in New York City, the Kimmel Center in Philadelphia, the Meyerson Symphony Center in Dallas, the National Cathedral in Washington, D.C., and at concert venues in Canada, Europe and South America.

He has recorded 10 compact discs. He is a champion of contemporary music, having premiered works by William Bolcom, Eric Sessler and Emily Mason Porter.