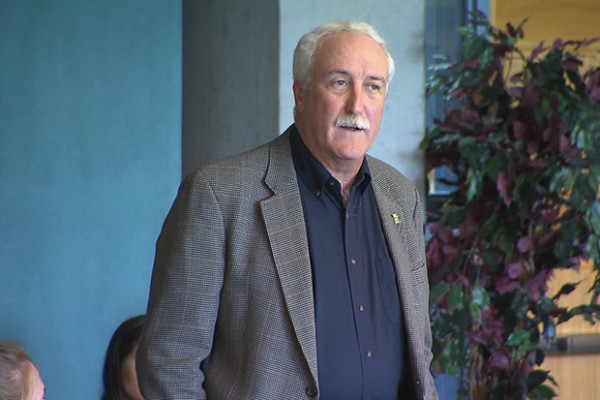 O’Keefe, former administrator of the National Aeronautics and Space Administration (NASA), is the 17th person in Syracuse University history to hold the title of University Professor.

O’Keefe has also been named the Howard G. and S. Louise Phanstiel Chair in Strategic Management and Leadership at the Maxwell School of Citizenship and Public Affairs. The Phanstiels established the prestigious chair in 2006, motivated by a desire to provide enhanced training for future government leaders who are ethical, strategic and innovative thinkers. The Phanstiel Chair is housed in the Maxwell School’s Department of Public Administration and International Affairs.

“I am honored to be invited to rejoin the Syracuse University community and, once again, to have the opportunity to pursue my passion for teaching, working with students and collaborating with so many great colleagues on a range of projects,” O’Keefe says. “I also look forward to contributing to the important strategic goals to which the University aspires.”

A longtime public administrator and a national security expert, O’Keefe has served in several top leadership positions in the U.S. government. O’Keefe has also held several roles in higher education and has been associated with the Maxwell School and Syracuse University for many years, as a teacher and advocate.

“Sean O’Keefe has broad experience and insights from the public and private sectors, with a great depth of understanding of public and business administration,” Spina says. “He is a scholar and teacher with deep connections to this University. We are proud to appoint him as University Professor and grateful to him for bringing his knowledge and leadership to our students from across the University.”

Along with the two new appointments, O’Keefe will play a leadership role in building Maxwell’s partnership with the Center for Strategic and International Studies (CSIS), including expanding programming and executive education.

The Maxwell School and CSIS launched a collaboration last year to provide a host of new educational, research and career development opportunities for students and faculty of the school while strengthening Maxwell’s presence in the nation’s capital.

The bipartisan, nonprofit CSIS is an international policy institution that conducts research and analysis on a range of issues—related to defense and security, regional stability and transnational challenges—and develops policy initiatives that look to the future. 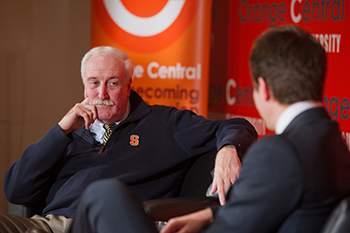 O’Keefe participates in an event during Orange Central in 2011.

“We’re delighted to welcome Sean O’Keefe back to Syracuse University and Maxwell,” Maxwell School Dean James Steinberg says. “Sean’s extraordinary career in public service and education epitomizes the values at the heart of our mission. His involvement with Maxwell, both in Syracuse and in partnership with CSIS in Washington, will make a major contribution to strengthening the school as we enter our 10th decade.”

O’Keefe is the former chairman of the board and chief executive officer of Airbus Group Inc. Immediately prior to joining Airbus, O’Keefe served as a company officer and vice president of the General Electric Co. in the technology infrastructure sector and as chancellor of Louisiana State University.

On four separate occasions, O’Keefe served as a presidential appointee. Prior to leading LSU, he was administrator of NASA. Earlier, he was deputy assistant to the president and deputy director of the Office of Management and Budget at the White House. He also served as secretary of the Navy, following service as comptroller and CFO of the Defense Department.

Between public service appointments, O’Keefe has held faculty posts at LSU, Penn State University and the Maxwell School, where he served as director of the National Security Studies Program and as Louis Bantle Chair of Business and Government.

O’Keefe earned a bachelor of arts degree from Loyola University in New Orleans in 1977 and a master of public administration degree from the Maxwell School in 1978.

O’Keefe serves on the boards of several private and nonprofit organizations and is the recipient of five honorary doctorate degrees and numerous public service awards and citations.