Maj. Gen. John Batiste Honors Veterans, Encourages Others to Commit to a Cause 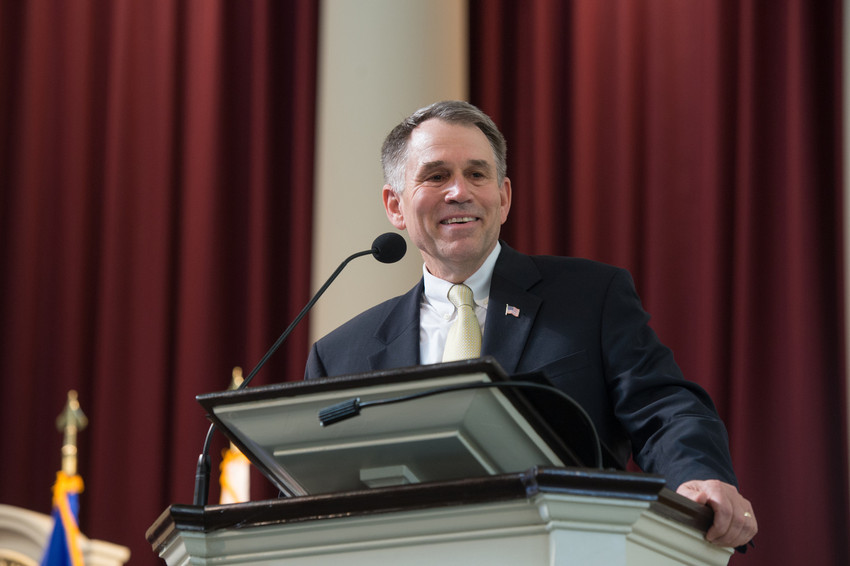 Before his keynote address during the Veterans Day Ceremony Tuesday, retired U.S. Army Maj. Gen. John Batiste called upon fellow veterans and their families to be recognized for their service from a grateful audience.

Dozens of men and women rose to applause in Hendricks Chapel.

“Today is about you,” Batiste said. “You’re the heartbeat of America.”

With music by the 198th Army Band and the Syracuse University Singers, words and prayers, and long-held ceremonial traditions, the campus community honored veterans during its annual Veterans Day Ceremony. 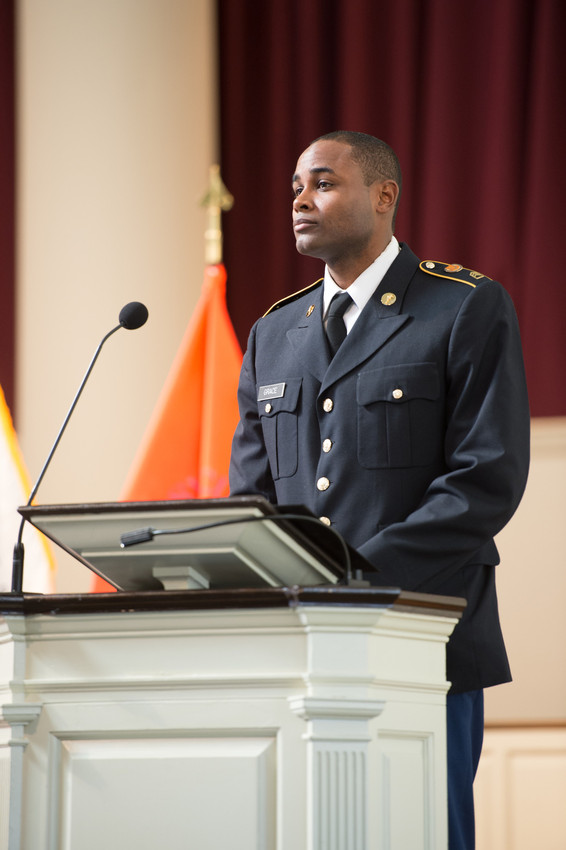 “We gather here today to honor our mothers, our fathers, brothers, sisters, husbands and wives,” Grace said. “Ordinary people who have made themselves extraordinary through their heroism and selfless service to our country.”

Chancellor and President Kent Syverud welcomed those in attendance, thanked those involved in the day’s events and introduced Batiste.

His final assignment was as commanding general of the 1st Infantry Division. During his command in 2004-05, he became concerned over the war planning and lack of a comprehensive national strategy. Instead of accepting a promotion to three-star general, Batiste retired and spoke out about his concerns.

“It further underscored the defining quality of Gen. Batiste’s character and of his career—his passion, his outspoken advocacy on behalf of and support for our nation’s soldiers and our nation’s veterans,” Chancellor Syverud said.

Batiste is president and CEO of Buffalo Armory, which focuses on producing better steel to protect troops. He is also an advocate for veterans’ issues, including treatment for those suffering from post-traumatic stress and traumatic brain injuries.

Batiste noted that the United States is still in combat with extremists 13 years after 9/11 and has other concerns with unfriendly nations. “Bottom line, we live in a very dangerous world today,” Batiste said.

The U.S. military relies on volunteers in its missions and since the Vietnam era, “this has provided us with the best trained, most capable, best equipped military in the world,” Batiste said. 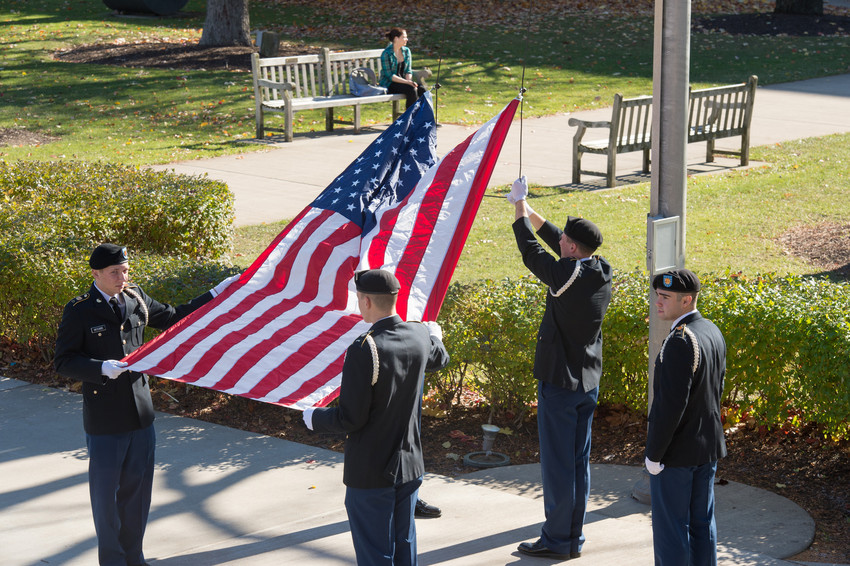 This reliance on volunteers has also led to most Americans paying little or no attention to the sacrifice of warriors and their families, with less than 1 percent of the population having served abroad since 9/11, Batiste said.

“With this gap between a volunteer military and the nation it serves, our political leaders will be more inclined to solve the world’s problems with the use of force,” Batiste said. But he noted that there are other ways to resolve conflict.

“Strategy must be deliberately developed with the ends, ways and means clearly defined and in balance,” Batiste said.

Batiste also shared his thoughts on what it means to be a veteran and the common thread among service members.

“Veterans put the nation first,” Batiste said. “We took an oath to support and defend the ideal that defines America.”

He described veterans as a diverse group, who value teamwork and train hard to set the standard for combat operations.

Batiste also noted that many veterans have seen the the brutality of war. “Many of us endured combat, defined by prolonged periods of boredom interrupted by moments of sheer terror,” he said.

“We all understand that how a country treats its veterans defines its national character,” Batiste said, and that war preparations must include the follow-through in transitioning veterans back to the nation after the guns are silent.

Batiste noted the special emphasis at Syracuse University on veterans, with the support it provides veterans and the work of the Institute for Veterans and Military Families, that “sets the standard” to tie together the work of government agencies and other organizations to assist veterans.

“There is a spirit here that is palpable,” he said.

Batiste encouraged civilians to pursue their own call to action: finding ways to honor veterans by getting to know them and find out about their service; committing to a volunteer cause in their own community; and maintaining “the honor and integrity of this kind of ceremony on Veterans Day.” 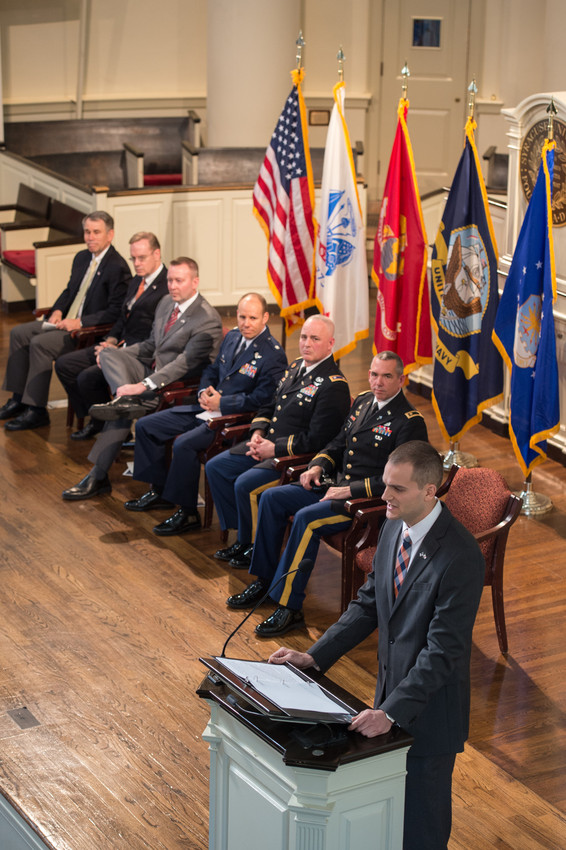 Student veteran John Higgins speaks about the perspectives that veterans bring to a college campus during Veterans Day ceremonies.

“A heartfelt thank you is a good place to start, but I encourage you to let your words bring forth action,” said Landis, a professor of aerospace science.

“Student veterans add a unique perspective to this university, both inside and outside the classroom,” said Higgins, noting how many veterans bring different life experiences and ideas than traditional students that enhance the classroom and discussions.

“I love this University,” said Higgins, who is president of the Syracuse University Student Veterans Organization. “I’m proud to call myself a student veteran here at Syracuse—a member of yet another generation of veterans passing through this great University whose future will be defined by our experiences here.”