Frequently Asked Questions and Answers About the Student Protest 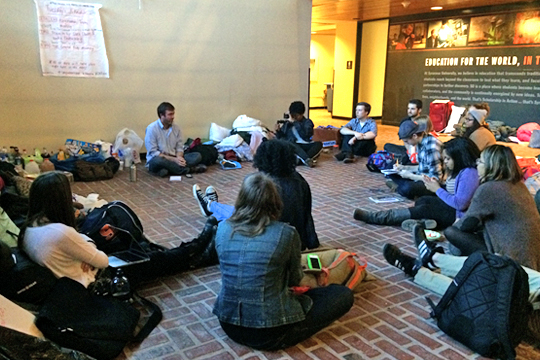 Students at the sit-in in Crouse-Hinds Hall

1. How is the University responding to THE General Body’s sit-in activity at Crouse-Hinds Hall?

As directed by Chancellor Kent Syverud, a team of University administrators, faculty and staff has received, reviewed and begun work on the evolving list of issues raised by THE General Body. This work began immediately on the evening of Nov. 3, after protesters marched to Crouse-Hinds Hall. Chancellor Syverud met with representatives of THE General Body for nearly two hours on the evening of Nov. 5 to discuss their concerns in a public meeting. That meeting was attended by more than 80 members of the group.

With the assistance of University College Dean Bea González, the University has continued to engage THE General Body representatives on a daily basis, providing detailed written responses as they’ve requested. Multiple meetings and working group sessions have been held with participation from members of the Chancellor’s Executive Team. Although this work has been very time-consuming, it is important, and the University is committed to it. We are hopeful this work ultimately will result in a process to address THE General Body’s concerns.

2. Is the sit-in affecting work and classes at Crouse-Hinds Hall?

University leaders decided classes and business normally conducted at Crouse-Hinds Hall should not be displaced by the sit-in. It is true that the sit-in has created a logistical challenge and a distraction to students attending classes, those who work in the building and daily admissions tours. In addition to responding to the issues raised by THE General Body, the University has committed significant campus resources to ensure that the students are safe and all building occupants can go about their daily work or studies. This effort has consumed a lot of staff time and resources and required approximately 1,250 overtime hours from campus DPS officers.

3. What is the University’s position on concerns identified by THE General Body?

4. Has the University taken action on the issues raised?

Yes. Although all of the issues are important, they do require careful and thoughtful consideration. Careful consideration should not be mistaken for inaction or resistance. The University is prepared to implement a substantive action plan right away that addresses a majority of their concerns.

5. What is the status of the sit-in at Crouse-Hinds Hall?

The sit-in is ongoing, and representatives of THE General Body are maintaining a constant presence on the ground floor of Crouse-Hinds Hall. Students have been provided a written list of occupancy conditions. The University expects them to comply with those conditions and all other University policies, including the Code of Student Conduct and the Campus Disruption Policy.

6. When does THE General Body plan to end the sit-in?

This still remains unclear. The University believes THE General Body’s protest activity needs to evolve so that the focus can be on finding solutions that benefit the entire University community. The hope is that THE General Body can organize its members and quickly come to an agreement on a process for resolving its concerns and end the sit-in. The University remains ready to move forward.

7. Has any activity related to the sit-in violated the Code of Student Conduct?

THE General Body has requested an amnesty agreement from the University, which the University has agreed to provide as part of an overall resolution that includes them vacating the building.

8. Where can I find more information on the sit-in?

The University’s news website https://news.syr.edu, has complete news coverage and all the written responses the University has provided in response to THE General Body’s concerns and demands. You can also read a fact sheet here.

9. How can I stay informed?