‘Breaking the Frame’ to Be Screened Nov. 17 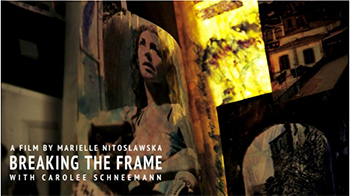 “Breaking the Frame” is a feature-length documentary portrait made with and about the New York artist Carolee Schneemann by Canadian filmmaker Marielle Nitoslawska. A pioneer of performance and body art as well as avant-garde cinema, Schneemann (“Meat Joy,” 1964, and “Fuses,” 1967/2007) has been “breaking frames” of the art world for five decades, challenging assumptions of feminism, gender, sexuality and identity. Nitoslawska (“Bad Girl,” 2002, and “Sky Bones,” 1999) has made numerous film essays, both feature length and short form, on ground-breaking movements and artists such as Domingo Cisneros, Szczepan Mucha and Jozef Robakowsk, and teaches film production at Concordia University in Montreal.