The Syracuse University Brass Ensemble (SUBE), directed by James T. Spencer, will launch its 2014-15 season with a concert in Little Falls on Sunday, Nov. 16, at 3 p.m. Presented by the Mohawk Valley Center for the Arts (MVCA), the concert will take place at Holy Family Parish (763 East Main St.). Tickets are $10 and may be purchased through MVCA or at the door. For more information, call MVCA at 315-823-0808.

SUBE is the College of Arts and Sciences‘ Ensemble-in-Residence. 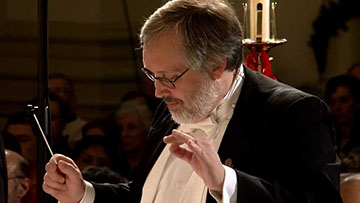 “We exemplify the University’s commitment to the creative and liberal arts by presenting brass concerts that are free and open to the public. The group also has a long-standing tradition of helping out organizations throughout Central and Upstate New York,” Spencer says, referring to an upcoming benefit concert for the Cortland Rotary Scholarship Fund.

This season’s repertoire draws from a variety of classical and pops favorites, including film music from “Frozen” and “Pirates of the Caribbean”; Bernstein’s “Candide Overture”; Berlioz’s “Roman Carnival Overture”; and Strauss’ “Radetzky March,” a staple of the Vienna Philharmonic’s New Year’s Concerts.

For nearly three decades, SUBE has provided playing opportunities for students, faculty and staff at Syracuse, SUNY Upstate Medical University, Cornell University and other area institutions. While Syracuse has had a resident brass ensemble for more than 40 years, SUBE grew out of a collaboration between Spencer and Bob Spradling, then director of Syracuse University Bands, in the mid-1980s.

Starting with only 10 musicians, Spradling led SUBE for three years, before turning it over to Spencer. Today, the group boasts more than 40 members and performs regularly at University functions, including convocations, Commencement and building dedications, as well as at venues throughout the region.

“We’re as much a family as we are a tight group of musicians,” says Spencer, who also serves as founding director of the Forensic and National Security Sciences Institute and a Meredith Professor of Chemistry. “Each of us is dedicated to performing his or her best.”

SUBE is particularly flush with doctors, lawyers and teachers, some of whom come from as far away as Ithaca and Herkimer for weekly rehearsals in Syracuse’s Hendricks Chapel.

Associate Director Craig Elwood G’90, who also plays flugelhorn in the group, says members often arrange their schedules a year in advance to accommodate SUBE rehearsals and concerts, which run from late August to early July.

“It’s pretty impressive, considering no one gets paid,” Elwood says, calling the group a “labor of love.” “We’re here because we want to be here.”

Adds Spencer: “We often have a waiting list [of musicians] because these kinds of groups are hard to come by. Once people join, they often do so for life. We still have some players from the Bob Spradling days.”

Other holiday concerts are slated for Auburn, Cortland, and Fayetteville.

For more information about SUBE, visit subrass.syr.edu, or follow them on Facebook. DVDs of the group are available at the Syracuse University Bookstore.