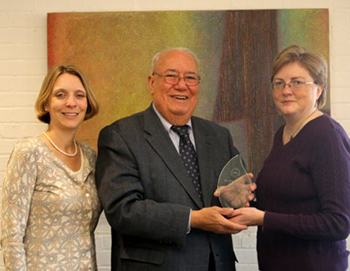 Garcia, who currently holds the position of professor of social work in the Falk College, where he has taught in the areas of gerontology, social policy, and human diversity for 35 years, was nominated by Maria Brown, a member of the board of directors for SSANY who also accepted the honor on his behalf at the society’s annual meeting in New York City  in October. Brown is the Hartford Doctoral Fellow in Geriatric Social Work and assistant research professor, Aging Studies Institute and Falk College.

Currently on the editorial board of the Journal of Sociology and Social Welfare, Garcia has served on the editorial boards of numerous national journals. He is the co-editor of three books, including “Elderly Latinos: Issues and Solutions for the 21st Century” (with Marta Sotomayor; 1993), “HIV Affected and Vulnerable Youth: Prevention Issues and Approaches” (with Susan Taylor-Brown; 1999), and “La Familia: Traditions and Realities” (with Marta Sotomayor; 1999). He is also the author of numerous articles and book chapters.

Garcia is a fellow of the Gerontological Society of America, and an elected member of the National Academy of Social Insurance. He was elected vice president/secretary of the Council on Social Work Education in 2012. He has held national leadership positions with the National Association of Social Workers and the National Board and Commission on Accreditation of the Council on Social Work Education. Garcia is the immediate past-chair of the board of directors of the National Hispanic Council on Aging. He is the immediate past chair and current regional representative to the National Policy Council of AARP, and a member of the executive council of AARP New York. He has also served as a vice-president of the Schuyler Center for Analysis and Advocacy and was recently made a Lifetime Honorary Trustee of the Center.

Nationally, Garcia is known as a strong advocate for Hispanic populations, especially the elderly. For his contributions to the social work profession and those whom it serves, he was named a Social Work Pioneer by the National Association of Social Workers. The National Hispanic Council on Aging acknowledged him with its Special Recognition Award for outstanding leadership and advocacy on behalf of older adults, and created the Alejandro Garcia Internship on Hunger and Poverty Policy. In New York State, Garcia has been the recipient of a number of honors, including lifetime achievement awards from the New York State Chapter of the National Association of Social Workers and from the New York State Social Work Education Association. He is a recipient of the Andrus Award, the highest recognition that AARP New York awards for community service.