To Members of Campus Community,

I’m writing with an update on my ongoing conversations with student representatives of THE General Body as they enter the fourth day of their presence on the ground floor of Crouse-Hinds Hall. 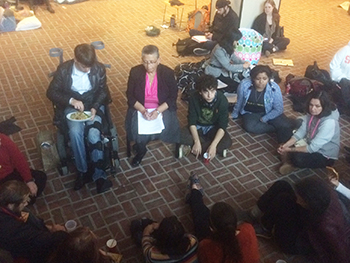 Last night Chancellor Syverud and I met for nearly 90 minutes with 80 representatives of THE General Body and campus community to listen to their concerns and discuss a process for continued dialogue to address the issues they detailed in the 43-page document released on Monday. Immediately following the meeting, the Chancellor, his Executive Team and I got to work to specifically address some of the most immediate and deliverable responses to their demands.

Early this morning, I approached the group with a number of responses and proposals we developed overnight in a good faith reaction to what we specifically heard them request at last night’s meeting. Our proposals included:

In addition to the proposals presented today, we also agreed to an ongoing and structured dialogue in the coming weeks about the full scope of the group’s concerns. Three items students mentioned in last night’s meeting that require further discussion and would be part of this process are:

In making these many commitments, University leadership asked for only one thing from the student group in return—that they commit to depart Crouse-Hinds Hall by tomorrow and return the building to normal operating status moving forward. This is a building that houses classes, offices and the Admissions Office, where prospective students and parents arrive daily.

In lieu of a meeting with Provost Spina and Dean Kantrowitz, and by vote of THE General Body this afternoon, the students requested the Chancellor’s Executive Team submit written responses to their Demands and Solutions. Tonight I shared our response with them.

So far we haven’t been able to reach an agreement. This is disappointing given the proposals that involve the Board of Trustees are time sensitive and require action by tomorrow morning. Nevertheless, I continue to interface with the Chancellor and the students to reconcile this situation as soon as possible and remain hopeful progress can be made.